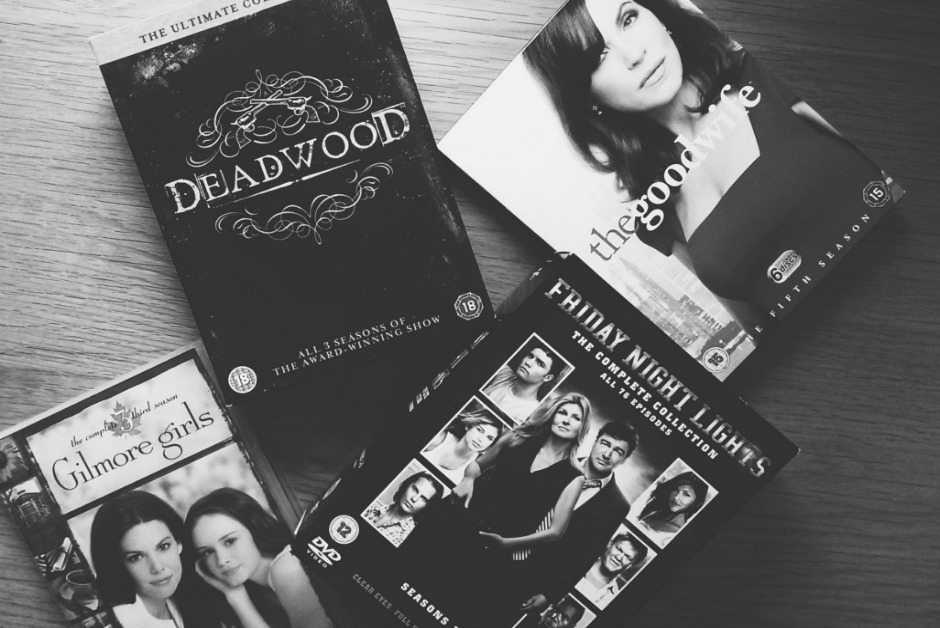 After reading Nicky’s post a few weeks ago and being asked for television recommendations by a friend of Rachel’s at her birthday lunch, I thought maybe it was time to share these a bit more widely. Watching television is one of my top three favourite pastimes and one that I spend a good amount of my spare time doing. The amount of time I spend in front of the box has decreased since we started this blog – funny, that – but I’ll still schedule in a good few hours per week, and more if I can.

I like my TV to be both of good quality and of a decent-enough length to allow me to enjoy a two-to-five episode marathon without exhausting the series (I am not going to call this ‘binge-watching’ – a term I deplore because of the implied negativity of watching TV episodes back-to-back).

A few of notes before we get to the list. Firstly, I’m assuming you’ve watched The Sopranos, The Wire, Breaking Bad, The West Wing, Game of Thrones and Mad Men. If not, then they are excellent places to start. Secondly, I should warn you that my preference – as will soon become apparent – is for drama. I like to laugh as much as the next person, but comedies just don’t keep me hooked as much as dramas do. Anyway, a good drama usually packs in plenty of funny because, well, life is pretty hilarious. So it’s not as though there is no laughing to be done while you’re enjoying any of the recommendations below. Finally, because too much TV is never enough, I’ve also included a show you could move onto once you’ve burned through the initial recommendation – this should help you avoid that deep feeling of loss when you get to the end of a great series. Get over one TV show by getting on another one.

Deadwood
This is without a doubt one of my all-time favourite shows. I love it so much that I actually own it on DVD – an honour I reserve only for shows that I completely adore and am certain to watch again (and again). I bought this for my friend for his birthday last year and he was very pleased. You’re welcome, Steve.

British viewers will spend a good episode or so trying to get past the fact that the lead character (the gnarled gent spewing profanities) is Lovejoy, but get past it you will. Deadwood combines some of the best dialogue you’ll ever hear on a screen of any size with a cast of compelling characters and the irresistible setting of an emergent society – all of which see it sitting deservedly at the top of my list. And did I mention that Timothy Olyphant plays a reluctant sheriff with a heart of gold and a terrible temper?

Then watch:  Justified
Timothy Olyphant plays a US Marshal with a heart of gold and a terrible temper. I think this show probably peaked in the second season but it’s still one I’ll happily give my time to.

Friday Night Lights
I must warn you that this show – about a Texan high-school football team – is so good you will suddenly become terribly interested in both American football and the great state of Texas. One terribly misjudged murder storyline aside, this is a show that manages to be charming and heartwarming without becoming twee or avoiding serious topics. I have no idea what life in a Texan town is actually like, but the show’s depiction of it feels authentic thanks to the fact that it’s shot in single takes using multiple cameras. Warning: you’ll fall desperately in love with almost every single character, and each one of them will let you down at some point. Apart from Tami; she’s basically perfect. Clear eyes. Full hearts. Can’t lose. Texas forever.

Then watch:  Parenthood
This show is about an extended family in Berkeley, California, and just all of their feelings. Even an annoyingly earnest ‘lead character runs for public office’ storyline didn’t make me stop watching. I’ve cried at this multiple times (this is a major plus in my book). Plus: Lauren Graham is in it.

The Good Wife
I touched on my love for this show in an earlier post – it’s a show that has significantly increased its profile the longer it has been on air, probably because – as far as I can tell – it actually gets better with each season. I think the latest season (season five) was the strongest yet, with one of the best handled exits of a lead character I have ever witnessed.

The Good Wife is ostensibly a legal procedural – and a solid one at that. However, the richness of the characters, the ripped-from-the-headlines (sometimes future ones) cases and the quality of the acting set it way above other shows in the genre. It also has the best guest actors and recurring characters in television. Protagonist Alicia Florrick gives Julianna Margulies the opportunity to showcase her mastery of understated facial acting; think the opposite of Clare Danes’ Carrie Mathison. I also love the fact that I am never quite sure how I feel about Alicia – I don’t know whether I actually like her, and I like that. The bonus good news here is that seasons 1-4 are available on UK Netflix.

Then watch: …Actually, I don’t have a ‘then watch’ for this one. I’ve thought long and hard about it, but there isn’t a natural progression to another show. If you can think of one, suggest it as a comment below. My only resort would be to go back to the start and watch it all again? (I did this.)

Scandal
I think most British people have by now at least heard of Scandal, Shonda Rhimes’ totally-bonkers-but-brilliant borderline melodrama. Starring Kerry Washington as a DC ‘fixer’, this series had me hooked from the get-go. The pace is frenetic and the plot twists are sharp, but some great lines, interesting characters and easily the best set-to-music montages on television will reward you handsomely for your time investment.

Then watch: How to Get Away with Murder
This is the latest production from Shondaland and so far (I’m five eps in) it’s thoroughly entertaining me. I’m so addicted to this one that I’ll even watch it week-by-week, like in the olden days.

Gilmore Girls
If you’ve hitherto managed to avoid encountering Lorelai, Rory and the residents of Stars Hollow (even though it was shown every day on E4 for what felt like years), that’s quite an achievement. However, if you have unwittingly caught part of an episode here or there, I can understand why you might not have been immediately enthralled. Until I sat down to properly watch it, I could never quite work out what kind of show this really was. After my mother and sister became fans and passed their box sets onto me, oh boy, did I get it!

Gilmore Girls is a very funny TV show that’s also incredibly generous. I get why some people find it irritating: the pace of the dialogue, the tweeness of the setting, the fact that they only eat junk food by the tonne and aren’t even slightly chubby. But none of that bothers me and, in fact, those are the very same things I love about the programme. Even the fact that the mother and daughter are best friends – something I would usually hate – is rendered charming here. Also, this show is the home of the fictional election I would most like to work on: Stars Hollow Town Selectman.

Then watch: Bunheads
Created by the same people as Gilmore Girls and with essentially the same lead character transplanted from small-town Connecticut to small-town California and sans child. Hardly anything happens – there’s lots of dancing and numerous appearances by Stars Hollow alumni. I almost wept when it was cancelled.

And if you must laugh your ass off at something televisual, then I would recommend my 2014 obsession, Modern Family (believe me, I know how late to the party I am on this one). Alternatively, try my favourite TV comedy of them all, Arrested Development; the it-makes-me-uncomfortable-and-I’m-not-even-sure-if-I-like-it It’s Always Sunny in Philadelphia; or the peerless Louis. Also, don’t hate The Mindy Project.

What do you think of my picks? What would you add to this list?