I have always thought of myself, with pride, as being a punctual person. Anyone reading this who knows me, however, might just have swallowed their tea the wrong way, because in fact (as I am starting to realise), I am incurably and chronically tardy. In fact, lately, whenever I am on time, it is a fluke.

Part of this is the pace of London living – who here doesn’t look up the route they need to take from A to B on the TfL website and then work to precisely the journey time shown, even though everyone knows that this estimate is at best optimistic? I usually leave the house five minutes after I should, then get in a flap as I encounter delayed trains, and compound my lateness with a mistake such as heading southbound instead of northbound on the Tube (as I did the other day en route to meet friends for dinner).

My hurried lifestyle also means that I don’t read and digest emails and texts as thoroughly as I should. At the start of the year, Oscar was invited to a birthday party, and I had read that it would run from 9.30am until the afternoon. In my head, this information mutated until I had convinced myself that we could arrive just before midday. Although the venue was just around the corner from our flat, we were so late that when we arrived they were getting ready to pack up. Oops.

Part of the reason for my chronic tardiness is also the need to accommodate Oscar into my schedule (but I have to admit that I use him as a scapegoat more often than is fair – he is a gold-plated get-out-of-jail-free card). The other day I arranged to go to the house of a friend from NCT for a play date, but that afternoon, Oscar decided to treat himself to a freakishly long nap, and by the time he woke up I was running almost an hour behind ‘schedule’. If I had woken him up, he would have been in too foul a mood for polite company, so I just had to accept that I would be late and make my apologies.

I’m not excusing my behaviour – lateness is really annoying. Rather, I’m coming to terms with it. I’m realising that although I’ve been seeing myself as a generally punctual person who is sometimes late, in the eyes of others, I am actually a hopelessly late person who sometimes manages to arrive on time.

Have I always been this way? I used to always be late for the school bus, but I always blamed my dad – and mornings in general – for that. Ditto with youth club – we would often arrive halfway through because we had been late leaving my grandparents’ house. Hmmm… But I’m never late for work. And I can definitely remember a time in the past (before mobiles, and work, and waaaay before kids) when I would arrive places on time and huff and puff to myself in annoyance when friends stood me up.

You see, when lateness happens to me, I tend to take it personally, assuming that the late person doesn’t value my time or care about the effort I made to get to our meeting place punctually. But when my lateness happens to other people, I don’t see why they should feel insulted, because I tried my best. Now I’ve started to realise that most people are like me: well intentioned but thwarted from punctuality by being slightly hare-brained and insanely busy/stressed. No one sets out to piss off their friends, family and colleagues. But piss them off I do.

In an effort to change my ways, I’m trying to train myself to become the punctual person I’ve always thought of myself as being. Until recently, I have done everything I can to arrive on time for an event – short of actually leaving the house with an extra half hour to spare, of course (because who can afford half an hour of dead time?) Slowly, I’m changing this habit. The last time we went on holiday, I planned to arrive at the airport three hours ahead of the flight rather than a bum-clenching two, and the effect was wholly positive: Juan and I started our break without a cross word. I’m also realising that getting up earlier and taking my morning routine slowly gives me enough time to do everything I need to before I leave the house, so I don’t have to sprint to the train with Oscar hoisted under my arm like a prize-winning marrow. And I’m learning not to view the prospect of five minutes spent waiting at the bus stop with horror. So don’t be surprised if one day soon you see me drinking alone, waiting for someone, as the clock strikes the hour… 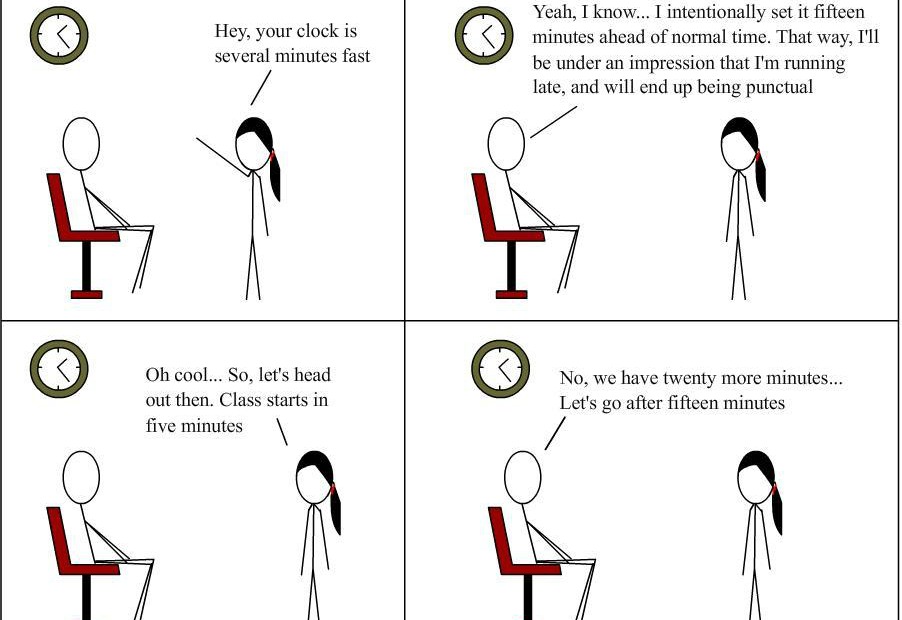 Are you rigorously punctual or sloppily tardy? What’s the latest you’ve ever been? And what tips do you have for curbing lateness?

P.S. My inability to relax, the rules of the Tube according to moi, and why I love London.