Happy Sunday/Day of the Dead everyone! And hope you had a ghoulish Halloween last night. The most spooky thing we did was to dress Oscar up for nursery – each class was themed, so he was one of a colony of miniature bats. I’ve never really celebrated Halloween, but this tradition I can get on board with – they all looked so cute! Here are a few more examples of babies in their Halloween finery. I also enjoyed these Halloween jokes, courtesy of Time Out. 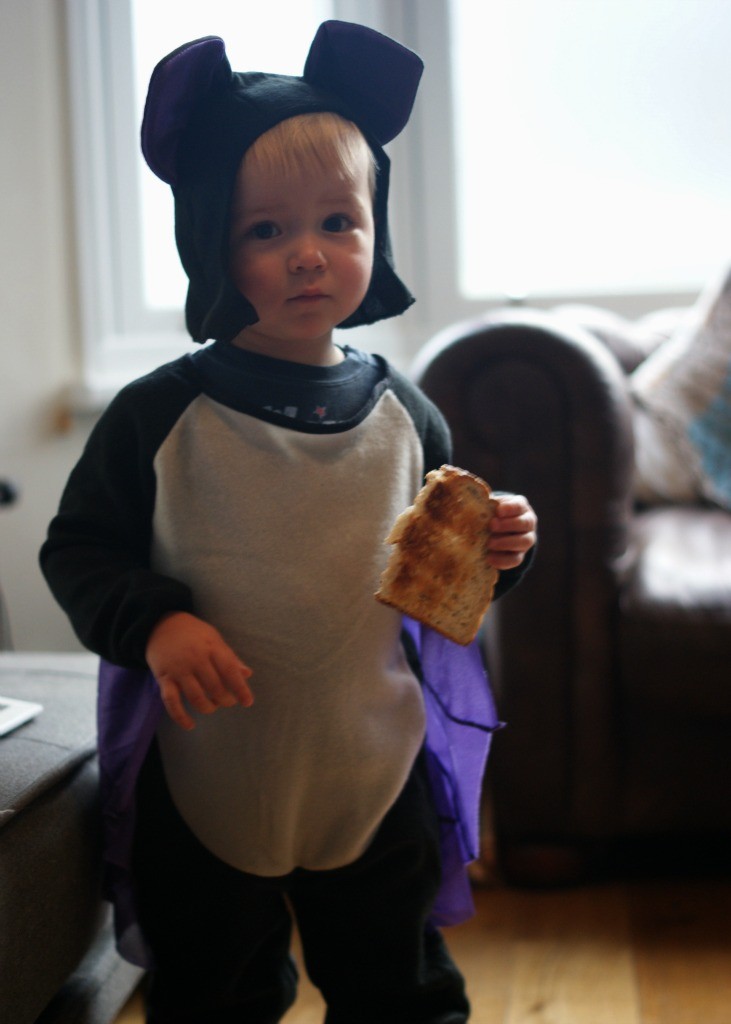 Since the clocks have gone back, autumn has really ramped up a gear – the leaves have nearly all gone from the trees and the temperature is dropping daily. As you can see from the main pic, we’ve been getting Oscar used to his new scooter walking around London’s many parks – one of my favourite autumn pastimes. This week, I thought I’d round up a few of the things that have been on my mind that encapsulate this season for me.

1. I don’t know why, but 60% of my friendship group seems to have their birthdays from September to December, so at this time of year I’m constantly looking out for presents and rushing to the post office at the last minute to get them to their destination more or less on time (and also wondering where all of my wages have gone…). Is this the case for you too? If so, can anyone explain the phenomenon in Freakomics terms?

2. Now that lots of my friends are having children, there are even more dates to remember. George celebrated his third birthday on Friday and Oscar and I were invited to his party. Oscar had a blast – partly because he is obsessed with George, who was treated to plenty of birthday kisses and hugs. While I was browsing the shops for George’s present, I bought myself to this blouse… perhaps it goes part of the way towards explaining my hollowed-out bank account. Judging by Juan’s reaction to it, it’s #manrepeller worthy but I don’t care.

3. This is also the season that our poor babies and toddlers go from robust, rosy-cheeked infants full of good health, to sniffling, coughing, puking bundles of germs. Oscar spent last weekend ill with a stomach bug, a series of days that involved a fairly high vomit count for him and a washing and drying marathon for me. Normally when he’s ill, Oscar loses his appetite but naps more than usual; this time, he refused to eat anything at all for three days but managed not to give into sleep at all. This led to a fair few tired, teary tantrums (from both of us), a hangover from his illness that we’re still trying to navigate. Or so I’m hoping – if his latest mood swings signal the start of the Terrible Twos for real, and the past few months have just been a dress rehearsal, then I’m in for a rocky year. Anyway, amidst all of the emotion and upheaval, these cartoons made me giggle.

4. Although Halloween doesn’t float my boat, Bonfire Night really does. Last year Oscar was too little (and Juan and I too knackered) to do anything; this year, Oscar and I are spending the weekend in a farmhouse with my school friends and their kids (hooray!), so some sort of Bonfire Night activity is a must. I am so looking forward to seeing what Oscar makes of it all – one of his favourite words at the moment is ‘Fire’. If you’re staying in or celebrating at home, try making Rachel’s hearty sausage stew.

5. And finally, something I’ve been pondering aloud for the last few days. The months with an R in them signal the start of Britain’s native oyster season. I know that as a professional ‘foodie’ (bleugh – hate that word) I’m meant to rhapsodise about oysters and get all excited about where to eat them, but in fact, let’s cut the crap: oysters benefited from a hugely successful rebranding exercise somewhere along the line, and anyone who celebrates them has a severe case of The Emperor’s New Clothes (IMHO – ahem). All I’m saying is that there are not many foodstuffs I throw to the back of my throat and swallow in one gulp so as not to fully taste them. What do you think?

What does autumn mean to you? Leave me a comment below!

P.S. We were big into babies on the blog this week: Rose shared her wisdom about babies entering friendships, and Rachel told us what coping with two small kids is like for her.