I bought our family’s first Peppa Pig DVD on holiday in Spain when Juan and I were looking for Spanish-language materials to bring home to the UK (we are trying to bring Oscar up as bi-lingual so that he can communicate properly with the Spanish side of the family in the future). It was the only series I recognised, and although I knew it was popular, I fully expected it to be one of those typically irritating and nauseating kids’ TV programmes. However, when Oscar and I watch Peppa Pig together, it’s me who never wants to switch off. In a way, it reminds me of my own childhood: especially in terms of how small events such as thunderstorms, washing the car, buying new shoes, or even getting hiccups could bring significance to the day. 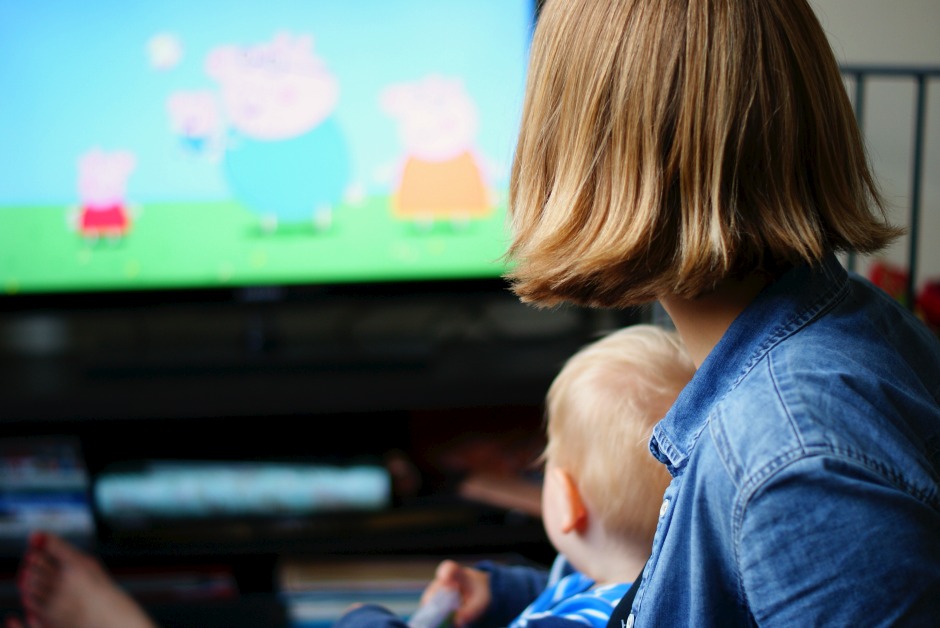 I like the wry humour that runs through the episodes – in Gym Class, for instance, when Peppa and her schoolfriends walk through the adults’ gym to get to their class and the narrator, deadpan, refers to how much fun the (grim-faced) parents are having; or in My Birthday Party, when Daddy Pig performs the lamest magic tricks ever. I love the animation, which appears simplistic but packs in an awful lot of detail, capturing the lumpen manner in which Peppa and her friends dance for Madame Gazelle in Ballet Lesson, the exact way clay can spin out of control on a potter’s wheel when shaped by an amateur (Pottery), and the awkwardness felt by shy Rebecca Rabbit, who blushes whenever anyone asks her a question.

It helps that the Spanish version does not have the class indicators of the original – I was quite surprised by how posh Peppa and co are in English the first time I heard them – and that they speak more quickly when dubbed into Spanish. But I still love the English original, and here’s why I think Peppa Pig fully deserves her success:

These little pigs, living their idealised small-town life where everyone knows and values each other and the sun always shines, should make us want to hurl. However, most of the time I just feel nostalgic for that period in life when the days are all about having fun, you’re constantly learning new things, and the only responsibilities you have are to eat all your dinner, be nice to each other, and keep your room tidy. In reality, it may be a rose-tinted view of the world, but shouldn’t everyone’s childhood be this carefree?

…but there’s nothing taboo about children crying

I love that George and his peers will suddenly burst into tears when frightened, frustrated, or provoked by their elder siblings. It doesn’t stop their world from being a safe and happy place, or their day from being agreeable, and it doesn’t lead to high drama – it’s just reflects the fact that children are prone to short outbursts of temper and then pick themselves up again and get on with things. The funniest example of this is in Edmond Elephant’s Birthday, which I can highly recommend.

Age is just a number

Grandparents get all sorts of unusual bit parts in Peppa Pig. Yes, they perform the usual grandparenty tasks such as baking, babysitting and building treehouses. But the skills and energy of the older generation are limitless – Grampy Rabbit is the most energetic character of all in Gym Class, while Grandpa Dog is a full-time mechanic and charters a steam boat in his spare time. Similarly, George is not typecast as ‘the baby’ of the family: In Camping, he manages to carry all the wood Peppa has collected and piled onto him without complaint. In Daddy Puts Up a Picture, he forms part of the human chain that supplies Daddy Pig with the bricks he needs to cover up his mess before Mummy Pig comes home, and he’s instrumental in warning the others of her return.

Gender stereotypes have no place here

I like that gender roles are not fixed in Peppa Pig – but I also appreciate that this fact is not rammed down our gullets. Mummy Pig will swan off to visit her parents with nary a backwards glance, knowing the Daddy Pig can handle the childcare. She will ask Daddy Pig to put up a picture, but do it herself if he doesn’t get around to it. Similarly, she might ask Daddy Pig to sort out the computer when it crashes (Mummy Pig At Work) but she’s the one who knows how to put the roof up on the car when it rains in New Car, while Daddy Pig gets flustered. For his part, Daddy Pig will be making soup for the family in one episode (Mummy Pig at Work), but totally ballsing up a dish in another (Pancakes).

George is a proper character

George is no Sideshow Bob – he is a proper character who, despite only knowing one word (‘Dine-saw’), contributes in a meaningful way to most episodes, as I’ve described. What’s more, he is good-humoured and resilient in the way that little brothers of bossy older sisters need to be. Which leads me to…

Peppa is not an angel

I think one of the reasons I identify with Peppa Pig is because I was (am…) that annoying, chatterbox, know-it-all older sister. I like that she’s spirited and questions the world around her while still being a well-behaved, decent and respectful individual. And I particularly like that the discipline and life lessons she receives come as a result of the circumstances she’s created, rather than from finger-wagging elders. For example, in Bicycles, Peppa teases George for having a tricycle and cycling slowly, but gets a taste of her own medicine when her friends point out that she still uses stabilisers. And in My Cousin Chloe, Peppa – who usually lords it over George – realises how it feels when her elder cousin comes round.

Do you like Peppa Pig as much as I do? Why? Which other kids’ programmes do you recommend?

P.S. Your next favourite TV show, the five best movies to cry to, and friendship lessons from Rose’s favourite TV females.