There are so many things that people advise you to buy when you have a baby. Duds I parted with my maternity pay for include this clever fruit-feeder

(it’s a great idea, but after a handful of initial successes, Oscar – who, at six or seven months, was probably too old for it – realised he enjoyed throwing it on the floor more than sucking it…); these squeezy pouches for homemade food

(honestly, Ella’s Kitchen has this covered – why was I trying to add more to-dos to my list?); and this crinkle-cutter knife

(the idea behind it is that your baby can grip fruit and other slippery food better if it’s got corrugated edges, but Oscar managed just fine). Also: splash mats – so overrated. They just aren’t as useful as they first seem; unless you’ve got carpets, you might as well clean the floor after your baby’s meal, rather than the splash mat itself, under the splash mat, and around the splash mat…

I often found that people’s well-meaning insistence about certain miracle products left me feeling overwhelmed. On top of that, if I’d bought everything people recommended to me, I’d have ended up spending all my spare cash on unnecessary gadgets, with most of them just collecting dust at home.

So, I’ve had a think back over the past 15 months and all the challenges it entailed – from getting used to each other during the first few months and teaching them to nap, to washing, weaning and everything in between – and I’ve come up with the seven essentials I found really pulled their weight and made life with a baby that bit easier. 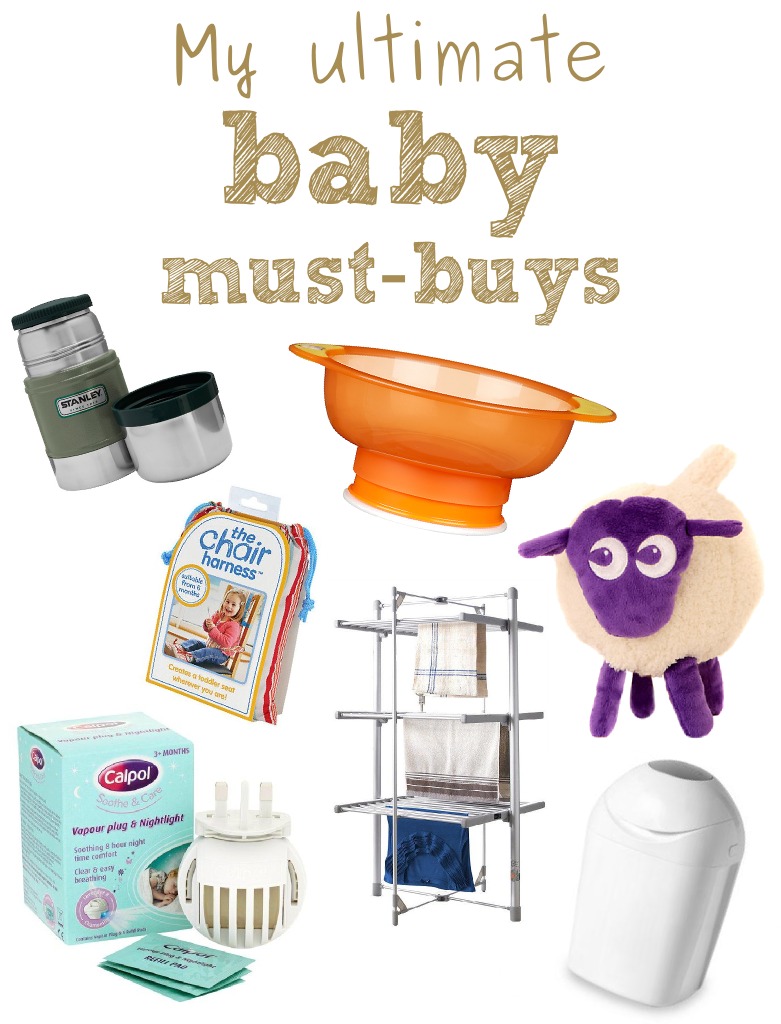 This is still a godsend to me, but it proved even more essential when Oscar was a newborn, because at that point every day saw at least two sets of vests and baby-grows, two muslins, and one of mummy’s tops go into the wash basket. Our flat is not only small but also short on radiators, meaning that wet clothes stayed damp for ages. Not any more: this three-tiered beauty helps me keep the immense pile of washing under control.

A.k.a. ‘the poo bin’. For the first few months of Oscar’s life, we bunged dirty nappies into a normal, flip-top bin from Ikea lined with supermarket plastic bags. At that point, it was being filled so regularly that the contents never stuck around in our flat long enough to offend. But when Oscar started becoming a one-poo-a-day man, we realised we needed to do something. This contraption is brilliant: stuff the dirty nappy into the bag, turn the nifty wheel to twist the bag around the nappy – et voilà! The smelly nappy is now part of a string of very unappetising ‘sausages’ that can be disposed of weekly without stinking out your home.

One night when Oscar was crying, I went into his room and found his nose completely bunged up with green bogies; he’d caught his first cold and was inconsolable. After a couple of failed attempts with one of those pooter contraptions, I ended up sucking out the blockage (gross). The next day, I raided Boots and found these. They fill the room with a strong menthol and lavender scent that lasts all night and keeps the baby’s nose decongested, so they – and you – sleep much better. Be warned that the refills are as rare as an uninterrupted night’s sleep – I stock up whenever I see them.

I’ve mentioned my guy Ewan in previous baby-related posts – I credit his lovely bedtime tune with helping Oscar get into the sleep zone, especially when it came to naps. He’s not a miracle worker, but his four noise settings do help keep both parent and baby calm as your child tries to drift off to sleep on his own.

I actually bought a bog-standard food flask from our local DIY store – although I like the look of this one! It was brilliant when Oscar was just starting to eat solids, as it meant I could prepare his food at home at my leisure and feed him nicely warm homemade food on the move – on the train, in the park, or in any café or restaurant – with minimum fuss. It also keeps cold things reassuringly cold.

This portable high chair is so handy – I’ve literally pulled it out of the bag countless times when stopping at a café that doesn’t have child facilities, or on holiday, or visiting friends without kids. At home, we keep it strapped to a dining chair so that when we eat together at weekends, Oscar can sit with us. During the week, we feed him in the kitchen, and this clever strip of cloth stops us from having to cart his plastic high chair from room to room.

Using this bowl combined with short-handled spoons (and a lot of patience) was how we finally got Oscar to feed himself. It’s wide and shallow, so it’s easier for him to see what he’s eating and get at it. More importantly, though, it suckers firmly to the table of his high chair, meaning that it can’t be tipped, shoved or defiantly thrown overboard.

What do you think of the products I’ve listed? Is there anything you would add? What was in your baby survival kit? And which products do you recommend for the challenges ahead?

P.S. Find more parenting tips right here on Everyday30, from how to potty-train a two year old, to what to buy for a child’s first birthday, to how to keep the romance alive with a baby in tow.

SFTW: On getting ‘beach ready’