Until I visited Amsterdam for the first time earlier this year, I hadn’t realised that London wasn’t the ‘cycling city’ then mayor Boris Johnson had talked it up as being. Yes, the capital has come a long way in terms of its relationship with cyclists, but I’m not sure how anyone can paint a few parts of the road blue and grandly proclaim them ‘cycling superhighways’ knowing that just 50 minutes’ flight away there’s a country where two-wheelers are the kings of the road, with their own roundabouts, traffic lights and segregated lanes. (Then again, if anyone has the nerve to do so, it’s the man who boarded the ‘Brexit battle bus’ and backed up Nigel Farage’s claim that we were sending hundreds of millions of pounds to the EU each week… grr). But back to bikes.

Cycling in Amsterdam is almost compulsory – and unlike in London, it’s a way of life, not a smug lifestyle choice or a manifestation of a mid-life crisis (in fact, I haven’t seen a single MAMIL since I’ve arrived). It’s so much part of the mindset here that even Oscar has started parking his tricycle a la Netherlands… 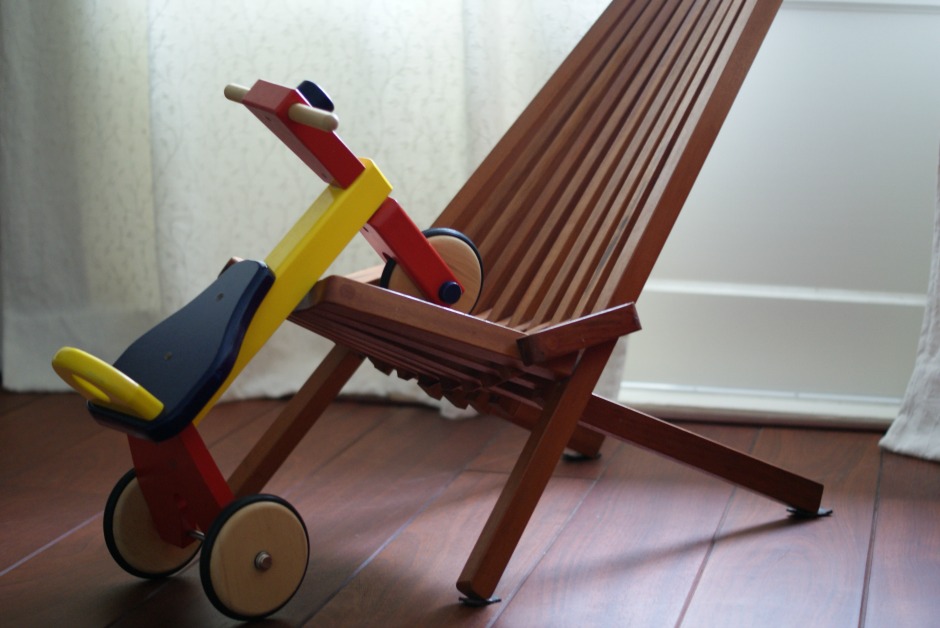 But despite Holland’s proximity to Britain, the Dutch cycling code is about as far from our customs as it is possible to get. I mean, they don’t ride penny farthings backwards down the street in Amsterdam or anything, but there are quite a few practices here that, if not adopted, will instantly mark you out as a foreign cyclist. Here are the native rules of the road that I’ve managed to glean so far:

Never, ever wear a helmet…

I was quite fond of my BMX-style helmet which – as London helmet style standards go – I thought was pretty cool (lime-green colour excepted). Wanting to set a good example to Oscar, I diligently continued to wear it when cycling around my new city. For the first couple of weeks at least… I have never turned so many heads as I did wearing that helmet in Amsterdam; when a group of teenage girls openly laughed at me, I knew I was on the brink of succumbing to peer pressure – at 35. 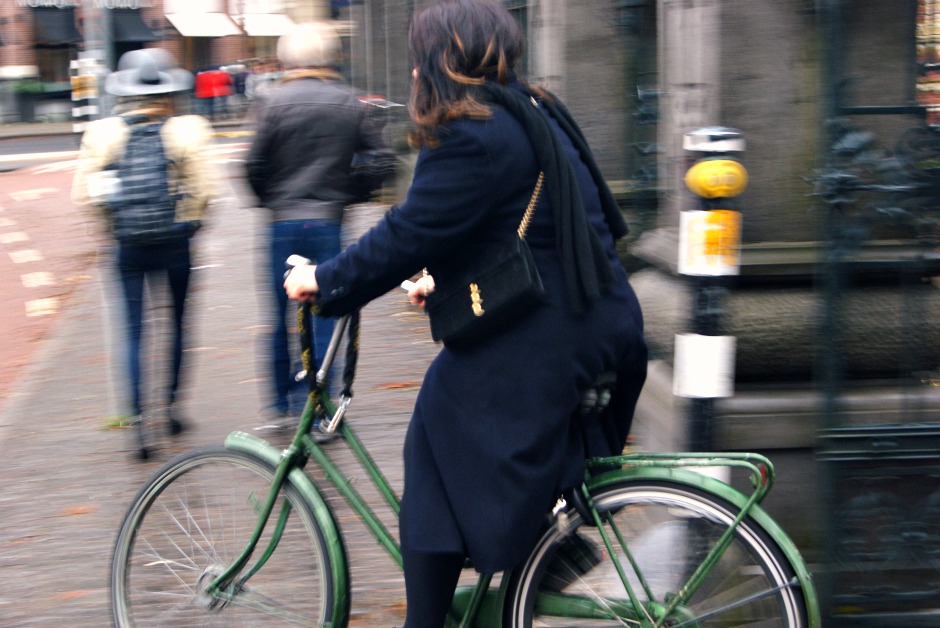 Dutch women seem to favour a wide-brimmed hat – it keeps the rain off their faces much more effectively than anything that would, you know, actually protect their heads. I have to admit, I’m tempted to invest…

Put yourself in as much danger as possible

This goes hand in hand with my first point. Even though I’m pedalling in a capital city on the wrong side of the road with a wriggly child throwing me off balance from the seat behind, and I have to cross two sets of tram lines and traffic every time I get to a junction, cycling here feels very safe. So born-and-bred Amsterdammers spice things up a little: the most Dutch way to cycle anywhere is with your headphones plugged into your ears, a cigarette in the hand holding the handlebars, the other hand tapping out a text, and your eyes wholly concentrated on your phone (you get extra kudos if you do this while heading down a cycle lane in the opposite direction).

Notice the two selfie-taking tourists at the bottom of this pic? Very good effort at out-risking the natives… 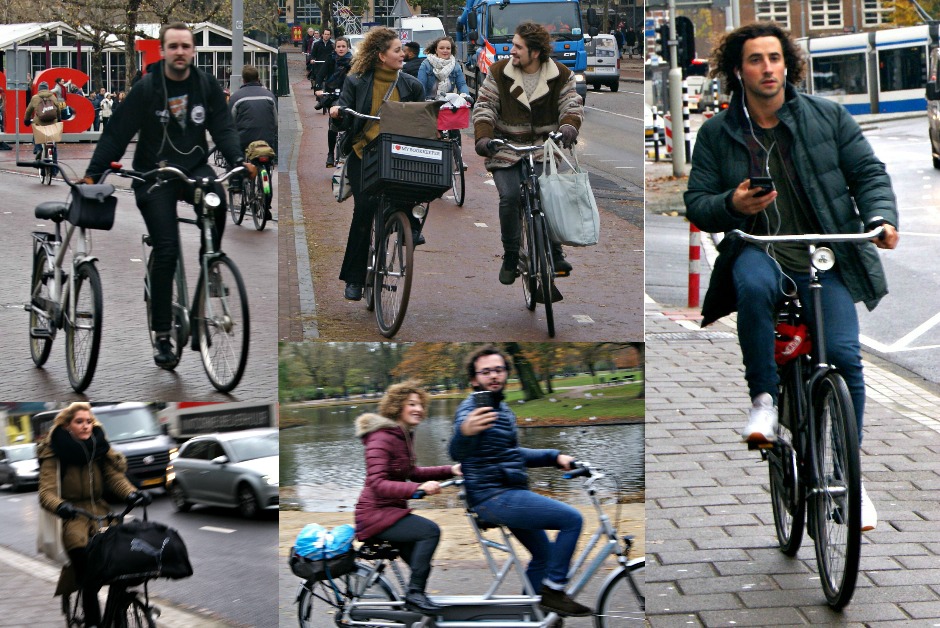 Accessorise your rainy-day rides with an umbrella

Although it rains almost constantly here, the downpours are still unexpected – so sharp and sudden that even a rain-aware English person can get drenched. Some Dutch cyclists do invest in waterproofs – but not as many as you might imagine. The most popular way to deal with the Dutch weather? Why, as dangerously as possible of course. When the roads are at their sloppiest and visibility at its poorest, they choose to whip out their trusty umbrella (usually a funny, angular storm umbrella), steering with one hand (when not texting, obvs) and letting the extra wind resistance up the thrill factor. 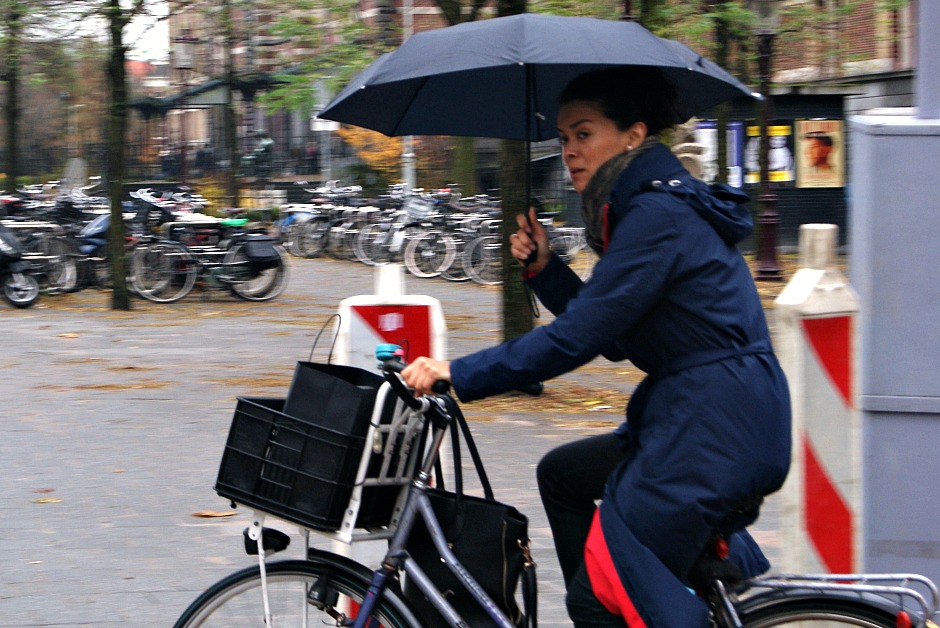 Gloves are for sissies

The onset of winter first makes itself felt on a cyclist’s hands. However, if you are a Dutch man, it seems that your hands should remain bare whatever the weather throws at you. The unspoken rule for going out and about on your bicycle in autumn seems to be: wear as little as possible. I’ve lost count of the number of men I’ve seen who would prefer to put both hands in their pockets while cycling rather than pull on a pair of gloves. It makes my hands wither just looking at them. 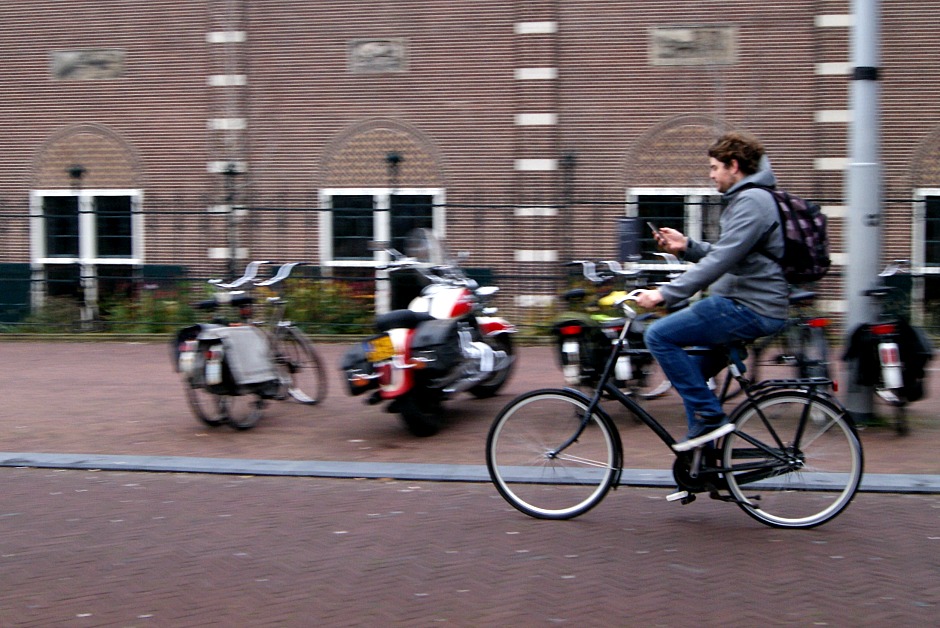 Spend as little money on your bike as possible

When we were planning what to take with us to the Netherlands, I was tempted to sell our bikes as scrap – I’ve had mine since I was 12, and it had been sitting in our back garden for three years (I’d graduated to a Brompton, you see). I’m glad we didn’t: it turns out that my bike is a complete stunner compared to some of the sorry specimens you see about town. Some have clearly been abandoned – they’re the ones with no tyres. All of the other bikes – the thoroughly rusted ones, the ones with pieces missing or hanging off them, the ones that have been badly spray-painted in bilious yellow – they’re all still considered road-worthy rather than ready for retirement. 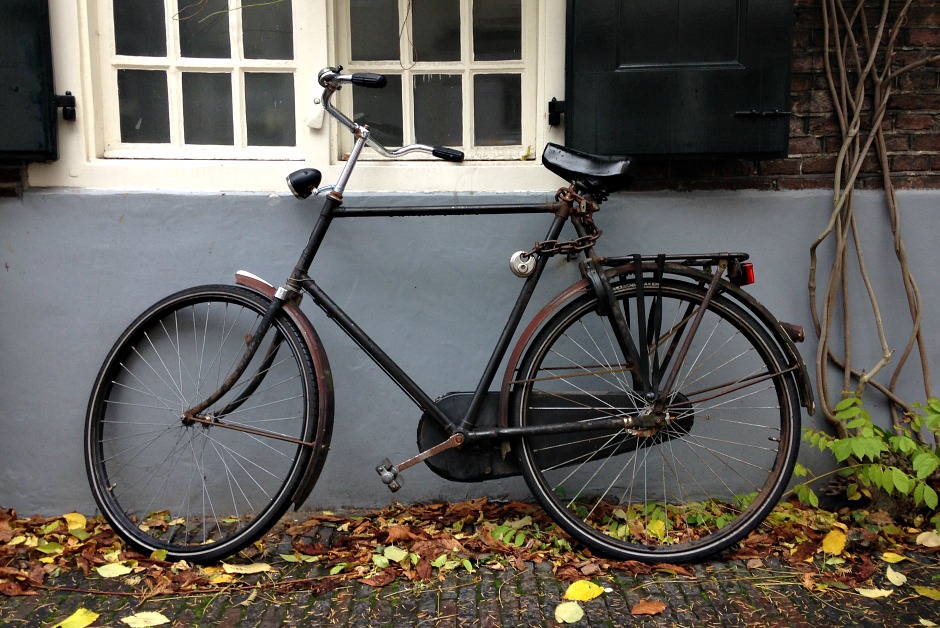 The first thing locals warned us about when we arrived was the prevalence of bicycle theft – coming from London, where many people spend more on their bike than on their car, I nodded along sagely. Then I saw the kinds of bikes Amsterdammers were riding around on. Ha! So now I understand why, although their bicycle may be their main mode of transport, and one of their most cherished belongings, it is often propped up outside a shop or against a rail, there for the taking, its chain wrapped decoratively around its frame. I guess it’s an extra element of danger from which Dutch riders can get their kicks.

This rusted specimen was parked outside the Rolex shop (the irony…) 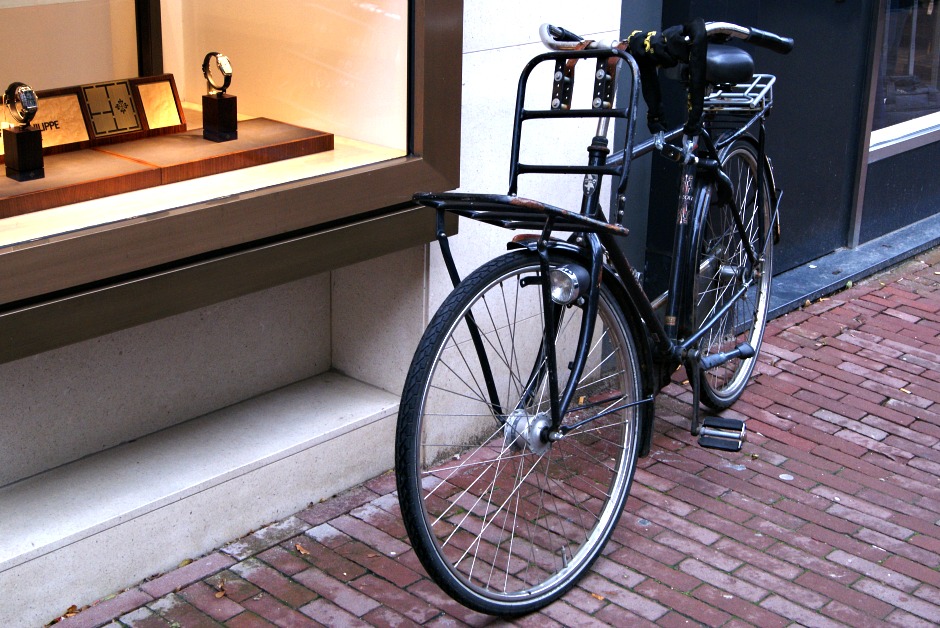 Deliveroo has nothing on the Dutch. Carrying one box on your back while cycling – pah! I’ve seen people freewheeling down the street, a full shopping bag swinging from each (gloveless) hand and a crate of beer on their heavy-duty front cargo racks (here, baskets are for chauffeuring household pets). I’ve seen curtain poles and DIY supplies transported on people’s bikes, passengers nonchalantly chatting to the driver as they hitch a ride on the back, and children clutching cargo at each end of their parent’s bike. It has to be seen to be believed, but let me tell you the Dutch can get a LOT of stuff on their bikes.

Here’s this dog-walker testing the versatility of bikes. FYI, when he saw me taking a photo of him, he shouted defensively, ‘This is Amsterdam!’ Quite. 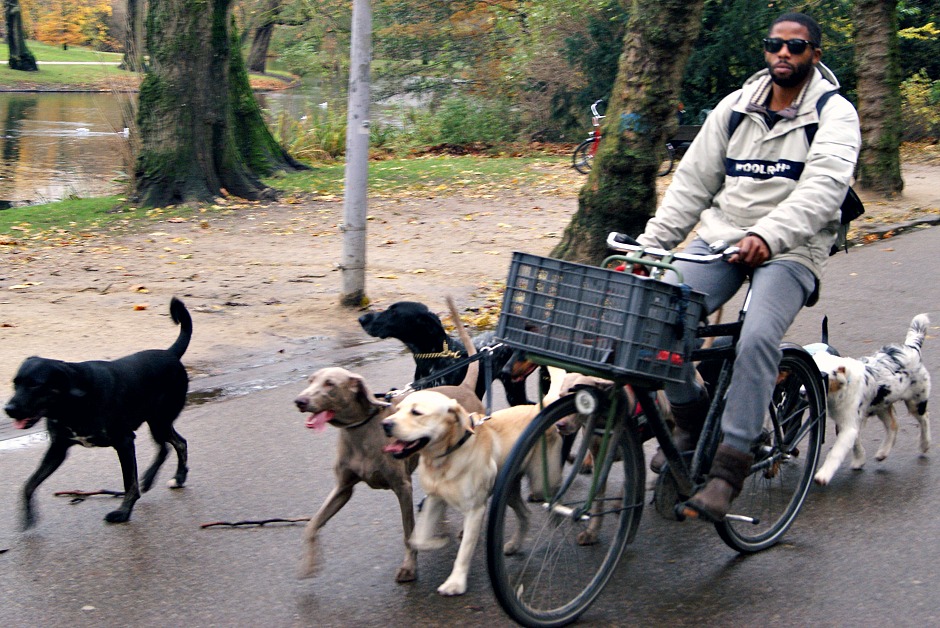 So, to recap: if you want to blend in here as a cyclist, wear as little as possible (I swear that I stopped at a light the other day next to a man wearing nothing but red underpants); treat your bike as if it is still in the doghouse for insulting your parents and running off with your partner; attempt to thwart the laws of physics each time you transport anything, and – and this part is crucial – leave your instinct for self-preservation at home, buried under your gloves, waterproofs and helmet. Good luck!

Have you ever cycled in Amsterdam? What struck you most about the experience?

P.S. Rules of the London Underground, why I love cycling, and a peek inside our Amsterdam apartment.