We recently went on holiday to Florida, which involved two nine-hour plane journeys with my 2½ year-old son (and a 25-week bump). I’m not going to lie: I was pretty terrified about that part. I just couldn’t see how I was going to keep him entertained for all that time in such a small space.

I lived to tell the tale though, and truth be told, it wasn’t that bad. It’s never fun and games travelling with a baby or toddler but you survive, you know? It’s also worth remembering – especially when you’re on the plane and desperately seaching for that extra ounce of patience – that we all hate travelling. It’s boring and tiring for adults, so imagine how interminable it feels for a child?

I am a firm believer that a long plane journey is not the time to fret about whether they’re enjoying excessive screen time or eating too much crap. The single goal is to make it to your destination in one piece!

To prepare myself, I obsessively read any advice I could find on flying with toddlers and implemented as much of it as possible. Here are some of the pieces of advice that made travelling with a toddler much easier…

What to take on the plane

I made sure to bring plenty of non-perishable snacks in single-serving packets. That way there weren’t any open packets spilling their contents everywhere, and I didn’t have to worry about food going off. I tried to keep it as healthy as possible, while also taking food I knew George would eat which included a tonne of raisins and Goodies snacks. Sweets and chocolate were also packed in case they needed to be brought out in an emergency- i.e. a meltdown.

George had his own little carry-on bag that I painstakingly packed with toys, books and puzzles that he could play with while seated. All the advice I read said to buy a couple of (cheap) new toys as well, for novelty value – I did this, but in reality the most useful thing in his bag was (surprise, surprise) the tablet pre-loaded with plenty of Thomas the Tank Engine. Try adding a film they haven’t seen before, so that the experience is new and special, but also bear in mind that toddlers love the familiar, so make sure you have a few old favourites at the ready, too. Also, try to get them used to wearing headphones before the flight (George hates them!) so that other passengers don’t want to kill you after one too many Peppa Pig episodes. And don’t forget to charge it to the max! Another surprise hit? The toy cars I added at the last minute; we had to wait at passport control for more than an hour once we landed, and those cars kept everyone happy. 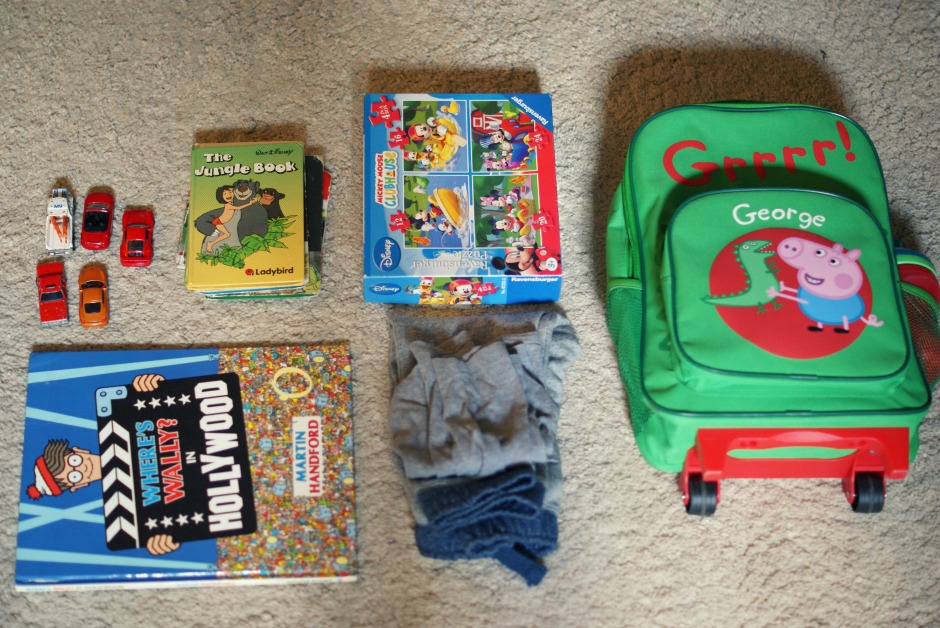 We didn’t end up needing them, but they’re always useful to have in case of an accident. If you have room, bring some for yourself too – melted chocolate and fruit juice can get everywhere.

By this I mean, hold back on all the really good stuff (like the TV or snacks) for as long as possible. While you’re waiting in the airport, let them run around to stretch their legs, burn off energy and encourage sleep later, or take them to look at the planes landing and taking off. Once on the plane, make a big deal about the plane taking off or the arrival of the in-flight meal to kill as much time as possible.

Chances are, at some point in the flight your child with cry/scream/have an almighty tantrum and it’s mortifying. Trust me, I know exactly how you feel. Of course, you do what you can to calm them down (chocolate!), but otherwise, what can you do? Children cry, sometimes for no reason. Just try to take deep breaths 🙂 Also, remember that most people will feel sympathetic towards you (let’s not dwell on the people who don’t). On the flight over to Miami, there were some twins, about 18 months old, who pretty much cried for the whole flight. I didn’t even care, because a) aeroplanes are louder than you think, so the noise was drowned out a lot, and b) I was just glad it wasn’t my child!

I remember reading this advice on Cup of Jo ages ago and when you think about it, it just makes sense. Instead of the whole family sitting together, one of you sits with the child and the other gets to sit on their own and take time out. Then you switch every hour or so. That way you each get to actually watch a film or sleep for a little bit and you find you have that little bit more patience when you’re on babysitting duty.

Don’t expect sleep, but encourage it

It kind of annoys me when people recommend getting a flight to coincide with naps or overnight as the reality is, I never have that much choice over when to fly – it’s a case of finding the cheapest tickets! That said, our best experience of flying with a toddler was probably the return flight overnight. I’ve learnt not to expect George to sleep much during a daytime flight, even if it occurs at a time when he would usually nap. I don’t blame him either, because planes are so uncomfortable to sleep on! However, I do try to encourage him to sleep by bringing a muslin (he always sleeps with one) or even putting him in PJs for a night-time flight. But I don’t get too stressed if it doesn’t happen.

In truth, there is something slightly magical about a night-time flight. It helps that the lights are usually dimmed and things are a bit quieter, plus toddlers are naturally that much more tired. George struggled to fall asleep for a few hours and there was definitely some crying. But when he finally did conk out (on the floor!), he managed to sleep through landing, disembarking and immigration control! Which brings me to my next tip: make sure you take a sling onto the plane. Even though you can take your buggy to the gate before you get on the plane, they often return it in the baggage hall with the rest of your luggage after landing – and that’s a long way to have to carry a sleeping toddler. 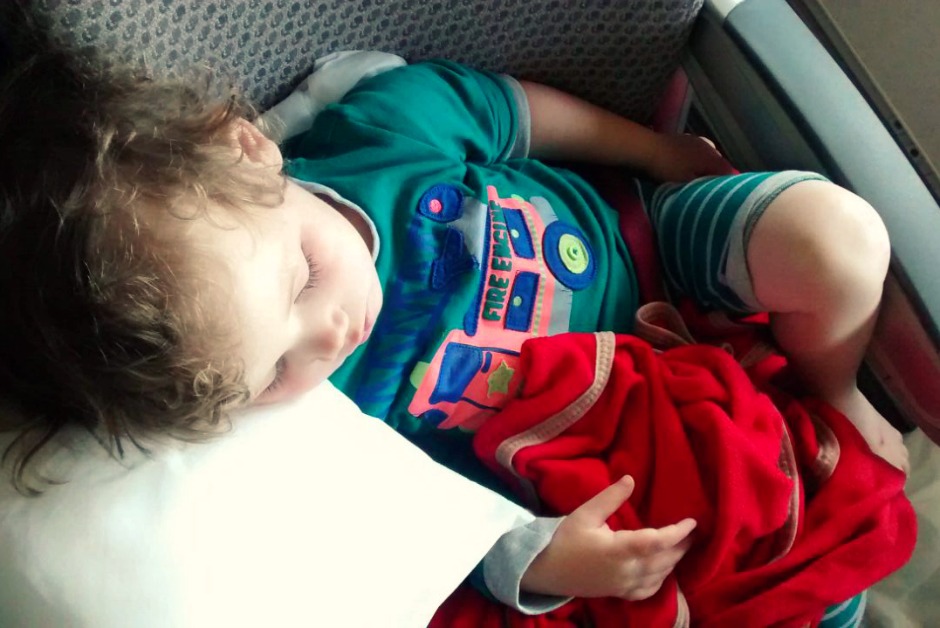 What’s your experience of flying with a toddler? Any other great tips?

P.S. How we potty trained our two year old, 10 ideas for quick baby dinners and how to keep the romance alive with a baby.