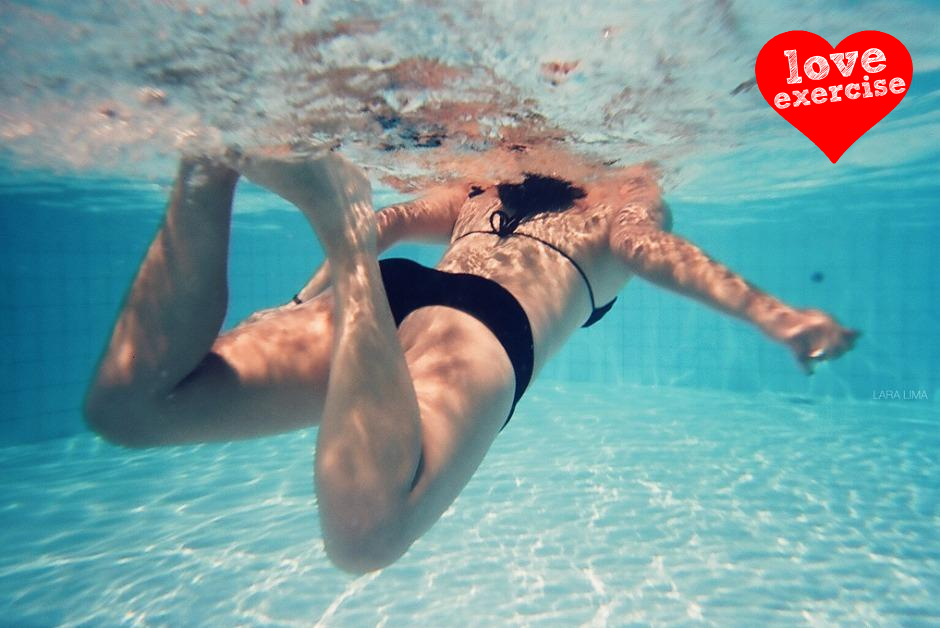 When it comes to sport, swimming suits me down to the ground. I’ve been doing it for more than 10 years now, but it took me a long time to find an activity that fit my lifestyle and temperament. I’ve never enjoyed team sports because I don’t like letting other people down but I’m not competitive enough to want to win at all costs (yes mum, it’s the taking part that counts). I found the gym too full of peacocks eyeing their reflection in the unflattering mirrors. And running just hurt my boobs and made my face blotchy.

Swimming, on the other hand, doesn’t let you work up a sweat (at least not the way I do it), provides you with a superhero-style disguise in the form of goggles and a swimming cap, and is a completely independent activity, meaning that if I decide to sack it off in favour of eating biscuits in front of a box set, I don’t have to make excuses to anyone but myself.

I rarely do sack it off though, because it makes me feel good and gives me space to let my mind wander as I clock up lap after lap. Also, experience has taught me that once you get out of the habit of exercise, it is much harder to get back into a routine, so I keep doggedly traipsing to the pool no matter how lazy I’m feeling. Over the years, I’ve forced myself to get up at 6am to hit the water before work, sacrificed my lunch hour for the sake of a few laps, and pitched up at the pool late at night to relax before bed (not all in one day, of course…). I swam throughout my pregnancy and really enjoyed the physical relief of being buoyed up by the water and the way swimming stretched my aching muscles. And when I returned to the pool after the obligatory six-week postpartum break, a whole half-hour to myself and for myself felt terrifyingly like freedom.

I have to admit though, I do hate swimming at this time of year. Every January, without fail, the pool fills with newbies fuelled by New Year’s resolutions to shed the post-Christmas stones or embark on a radically healthier lifestyle. They often come in pairs and spend a lot of time giggling or gossiping at the sidelines. When they do swim, they do it slowly, clogging up the middle lane as they thrash around and strain to keep their hair from getting wet. I wouldn’t mind all of this if it wasn’t for the fact that six weeks later they are nowhere to be seen.

These are not the only frustrations I feel at the pool. There are the swimmers who won’t let you pass despite you accidentally tickling their toes with each stroke and the ones whose wake almost flings you out of the pool when they surge past you – these are usually the same people who insist on practising their butterfly stroke (for what?!). But now I’ve bought a property and settled into a community, I’ve realised that pool rage is out of the question – imagine calling someone out on a breach of pool etiquette only to find that, once they remove their goggles, they’re a trusted neighbour, or a friendly shopkeeper whose business you can thenceforth never again set foot in. In any case, I’m there to relax and take time out.

So I button up, wave people past me with a smile, and pootle along at my regular pace (too slow for the fast lane, too fast for the medium lane). And as I swim, I contemplate things. Often, they’re frivolous. Could people take swimming tests to ascertain their correct lane speed? Do women in skirted swimsuits actually look any slimmer? What would I have to do to get my own lane – or better, my own pool? (For these and more water-borne issues, I find the Guardian swimming blog a fun read.) I also think about bigger issues: things that are worrying me; problems I need to solve; situations I need to rationalise; tasks I need to prioritise. Recently, the mental space of the pool has had me coming up with blog ideas and mentally composing posts as I swim.

I always leave the pool feeling better than when I got in – even if it’s heaving with novices, I’ve swallowed the gag-inducing water, and I’ve got other people’s hair tangled in my fingers. And the effect it’s had on my body has been not only slimming but strengthening: before Oscar I even had a core, all thanks to those laps.

And now, Gillian Anderson – who played Stella Gibson, a modern-day superhero, in The Fall – has made swimming the exercise of choice for the woman who rocks a silk blouse. Which is exciting – until I think about how many people she’ll inspire to muscle in on my pool…

Is swimming the sport of choice for you? What do you like – and dislike – about getting in the water?