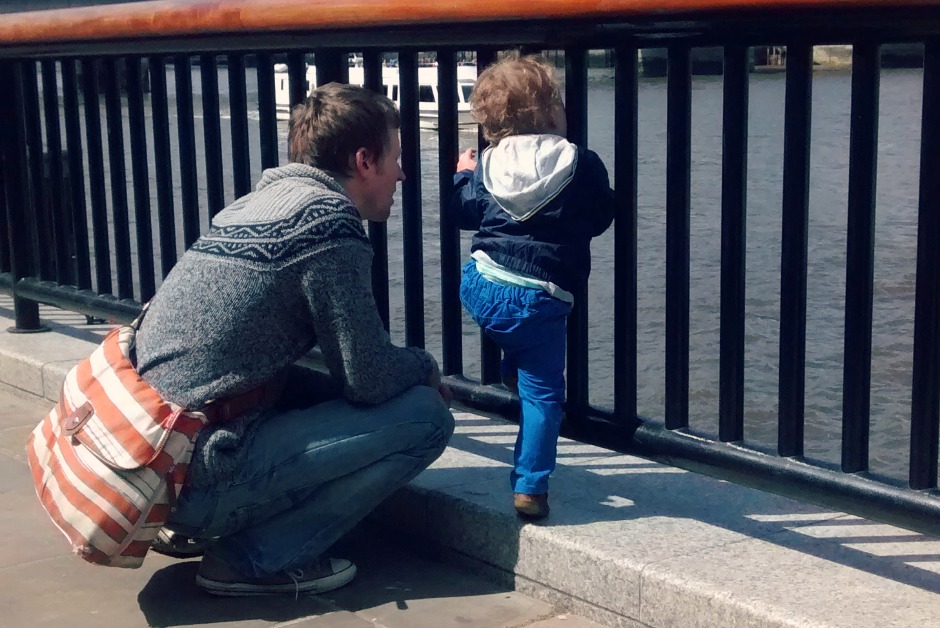 When George was about eight months old, I decided to go back to work full-time. George’s dad is a teacher, so I returned to work during the school holidays while he looked after George full-time. Then, in September, George started with a childminder and Pete went back to work part-time.

It’s something I had thought about a lot before George was born. I suppose I resented the fact that society expected me to give up work for a year, then return part-time, and then take even more time off if we had another baby. I felt my career could quite easily grind to a halt while my partner’s carried on as normal. Just to be clear, I am hardly what you would call career-driven, but it just seemed so unfair. We were both having this baby, so why shouldn’t he make a sacrifice, too?

I think dads going part-time is an option that not many people contemplate – out of my peers, I’m the only mum who took this route. But I also think it’s something that’s worth considering. Society expects women to be the main caregiver long after maternity leave is over. As soon as George was born, most people assumed I would automatically return to work part-time and some people asked if I was going back to work at all.

Most of the mums I know work part-time, and there’s nothing wrong with that. Nor is it impossible to have a successful career while working part-time. My problem is that sometimes these situations just sort of happen to us without us stopping to think about whether dad could take on some of the childcare.

Of course, it’s easier to have these discussions before baby comes along and you’re not weighed down by the all-powerful maternal guilt or totally in love with your new role. Because the truth is that maternity leave and working part-time are actually quite nice. Really, really hard work as well, but a great way to spend as much time as possible with your little one. On good days, it’s the ideal set-up (let’s not go into the bad days right now…) So why shouldn’t dads enjoy a taste of that work-life balance, too?

However, the real benefit of making caregiving a bit more equal is what it can do for your relationship with your partner. Once Pete started spending all that time alone with George, he finally understood how exhausting and boring entertaining a child all day can be. What’s more, we could finally bond over tales of George refusing to nap or generally being uncooperative. Obviously, Pete and George spending more time together strengthened their relationship, too. I can’t recommend it enough.

But what was it like for me working full-time? Well, I loved reclaiming the professional part of my identity and having a purpose outside of my maternal role. I loved the freedom of being able to pop to the shops at lunchtime on my own. And I loved being able to make – and savour – a cup of tea at any time during the day. Of course, I missed George terribly, too, but on balance, it was fine.

I admit that I was lucky – I could leave work at 5pm on the dot and arrive home by 6pm, which gave me enough time to catch up with George before bedtime. I also worked from home one day a week, which meant that I could collect him from the childminder on that day. I know that not everyone has a job that affords them the same flexibility, not everyone wants to return to the job they left, and that for some people, it’s economics that dictate who becomes the main breadwinner. I also know that full-time work for both parents is sometimes the only financial option. I’m not judging anyone’s choices.

My point is that, although I think most of us go into parenthood with the intention of sharing the responsibility equally, further down the line many of us take stock and realise that’s not actually how things turned out. Pete and I are by no means a perfect example of how to approach the problem – but having dad work part-time did help us to redress the parenting balance a bit in that first year.

I’d love to hear how you figure out childcare. Am I stating the obvious – are there loads of dads out there working part-time? Or am I making dads going part-time sound too easy?

Networking 2: How to make contacts subtly but effectively