Can you believe that Thomas is now nine months old?? Seriously, it’s going by so fast second time around. He’s been eating food for more than three months now and, just like his brother, he’s taken to it with gusto, shoving food into his mouth with giddy abandon. 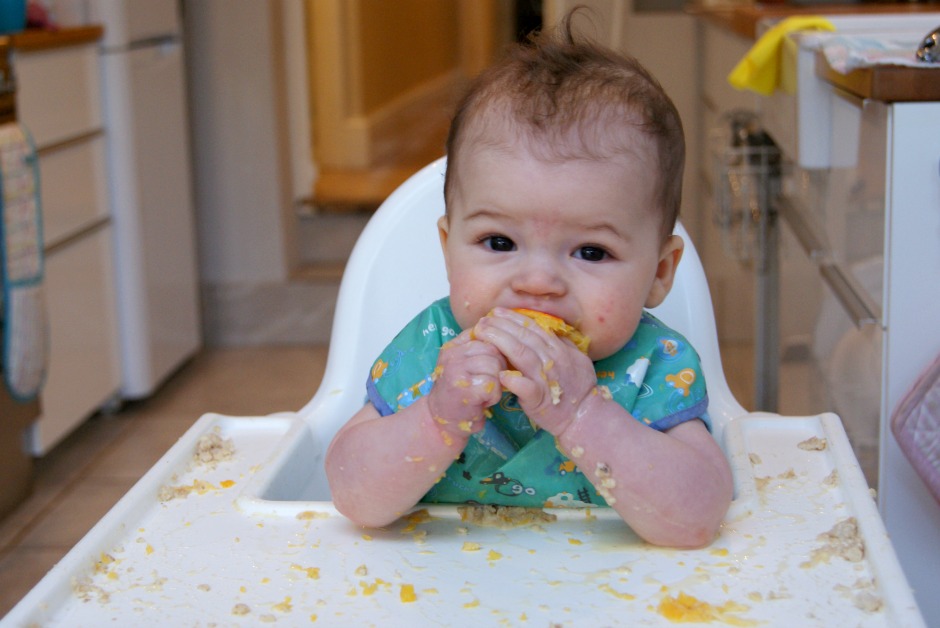 We’re going for a broadly baby-led weaning approach.* For us, that means we generally put a bit of whatever we’re eating on his high chair tray and let him feed himself (obviously, with no added salt or sugar).

When we first introduced food to Thomas, he struggled to get a grip of anything, so it was a case of trial and error discovering which foods he could actually manoeuvre into his mouth. As with most skills that children learn, at first you feel like they’re NEVER going to get the hang of it, but if you can bear to leave them to it, it’s amazing how quickly they do learn and now, at eight months, Thomas can pretty much eat whatever we’re eating. It’s worth mentioning that for the first few months of weaning (at least) they’re getting nearly all of their needs met by milk, so it’s ok if not much goes in their mouth!

I thought I’d share the finger foods that worked well for us at first, as they’re all things I still prepare for him now for lunchboxes or to appease him while I make dinner.

Sweet potato chips
Cut sweet potatoes into fat chips, drizzle with oil and roast in the oven until soft. The tougher outside is great for babies to hold onto while they suck out the middle.

Microwave-steamed veggies
I’ve only just discovered this trick, but I love it! Cut carrots into thick batons and broccoli into trees, put them into a bowl with a splash of water, cover and cook in the microwave on medium for a minute or so. It can take a few attempts to figure out the exact timings, but you basically want them cooked enough to be able to squish between your fingers. I also do this with peeled apple wedges.

Orange wedges
These were a huge hit. The skin is like a ready-made handle and they suck on them for ages.

Cheese
We normally use cheddar cut into batons.

Pancakes
We make pancakes a lot in our house and this easy recipe is suitable for babies – Thomas loves them. We sometimes mix finely grated apple into the batter, too. Or skip the banana and add other veggies like mashed sweet potato or grated carrot.

Strawberries and raspberries
These are the perfect shape for picking up with fat little hands and the perfect level of squishiness for babies to gum.

*If you’re interested in finding out more about baby-led weaning, this site is probably a good place to start and this article about some common baby-led weaning myths is really interesting.

Did you do traditional weaning or baby-led weaning?