Before we left, I joked with Rose that I needed to write an FAQ for all our friends, as they kept asking the same questions. So even though it’s a bit late, I thought I’d bring you all up to date on the why and how of us moving to Gran Canaria. 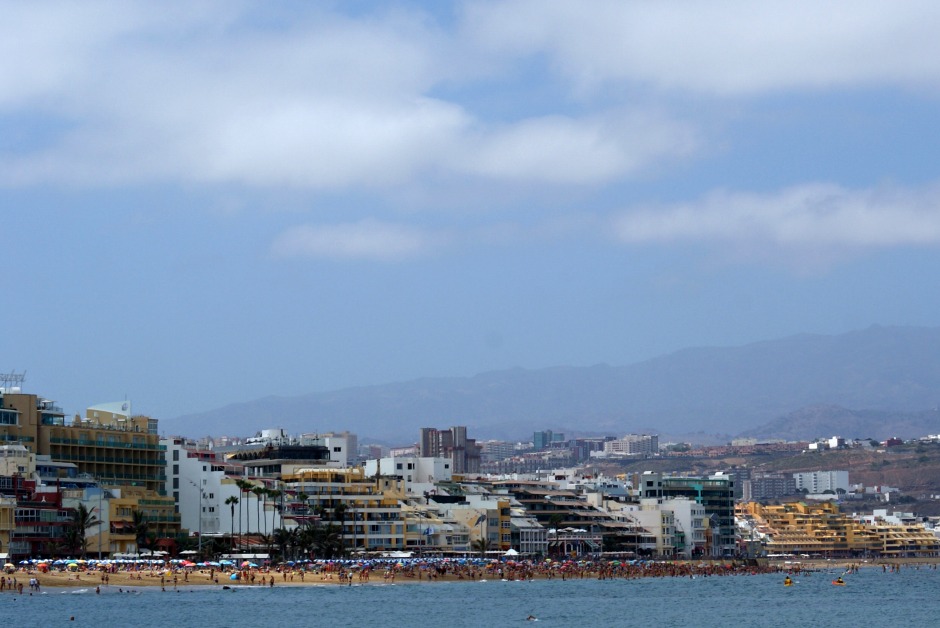 Pete is a teacher and was looking for a new job. Teaching is a bit funny as most new jobs are for a September start, so you pretty much get one chance a year to find a new job. Nothing that interesting was coming up in the UK, so we talked vaguely about looking abroad. Before I go on, I think I need to emphasise here how unadventurous I am. I never went travelling when I was younger and even though I like nice holidays, I also really really like staying at home on the sofa. So while I wasn’t super-keen on the idea of living abroad, it seemed fine to just ‘have a look’.

Then, this job in Gran Canaria came up so we turned to Nicky and Juan (who met in Gran Canaria and lived there for two years – Juan is from there, actually) for their opinion and they said we should go for it. It was pretty surreal when Pete got the call offering him the job, especially as we’d never visited before, but we didn’t have much time to stress about it and figured it’s one of those things you just have to say yes to, right? Right?!!

Pete is going to be teaching at a British school – that means the children are all taught in English and they do English qualifications so it won’t be too much of an adjustment for him, although the students will mostly be Spanish kids. I’m freelance at the moment and can work remotely so I plan to get a desk in a co-working space.

What about the children?

Pete’s school starts at age three, so George will start there in September (sob!) and we’ve found a nice nursery for Thomas. Childcare is sooo cheap here (well, for an ex-pat anyway)! Thomas will be in full-time nursery (although I plan to pick him up early) so I want to take the opportunity to scale up my work (and take lunch breaks by the sea).

Can you speak Spanish?

Un poquito… Pete and I had been doing a combination of Michel Thomas and Duolingo (both of which I recommend). Pete was a bit further ahead than me and is also totally shameless when it comes to trying to speak Spanish – and he’s doing surprisingly well! He’s even managed to call Spanish estate agents and arrange viewings. I, on the other hand, am a bit further behind and honestly, trying to speak what little Spanish I know is so far out of my comfort zone that I’m finding it difficult. But I’m getting there! Obviously lots of people speak at least some English here, and I’m sure we could get away without really learning any Spanish while we’re here. We’ve spoken to a few teachers at his school who’ve been here for years and barely speak any, but we’re both keen to learn.

What did you do with all your stuff?

We’re renting out our flat in London, so we left all of our furniture behind. After much research, I decided the cheapest and easiest way to bring everything else over was on the flight with us. Between the four of us, we could carry 12 suitcases on our Easyjet flight! A few months ago we started the great de-clutter project, which basically involved sorting through everything we owned and deciding whether we wanted to take it, leave it behind or get rid of it. I figured that if we weren’t going to need something in the next two years, there had to be a good reason to keep it, so in the end I managed to keep the stuff we left behind to quite a reasonably restrained amount. There’s just one cupboard under the stairs in our flat that’s absolutely stuffed. We took about a million bags to the charity shop and I eBayed anything I thought might make money (with mixed results). In the end, we were right up to our limit of 12 suitcases x 20kg which is 240kg – nearly a quarter of a tonne!

How did you physically move it all?

Haha, I’m not sure! We had our luggage collected and taken to the airport by airportr (which is a fantastic service) and Pete’s dad came to the airport to help us actually check it all in. At the other end, we found a porter in the baggage reclaim area who helped us get it all out (while everyone stared at us) and we were met by someone from Pete’s school who had arranged several taxis to transport it all. I’m not going to lie that that, on top of a four-hour flight, made it a looooong day, but we survived without any major catastrophes (just a few tantrums). We were just relieved that all our bags made it through.

Where will you live?

We’re currently working on this. The rental market in Gran Canaria moves very quickly so places often come onto the market ready to move into. The school has rented a holiday apartment for us for a couple of weeks while we look for somewhere. We know that we want to live in the capital, Las Palmas, we want to be close to the beach and we want enough room for all the visitors we hope to have. I think I’ll write about this more when we’ve actually found a place!

Phew! Have I missed anything? Oh yes, Nicky’s moving, too – to Amsterdam. But I’ll let her fill you in on that…

What do you think? Are you secretly jealous or is this your worst nightmare?

P.S. A Kent getaway for the whole family, the perfect holiday and Airbnb tips.

A cure for acne that is free and simple