I love Airbnb – I love its egalitarian nature, I love the choice it offers users, and I love the variety. Also, since having a baby, I’ve found renting an apartment via Airbnb a much more suitable alternative to staying in a hotel. Whenever we’ve stayed in a hotel with Oscar, a typical evening has involved creeping around a darkened room to gather necessities, silently eating a takeaway in the bathroom, then watching a box-set on the iPad under the covers, sharing a pair of headphones (or, asking a babysitter to do the same). Since we started renting apartments via Airbnb, however, our dignity has been restored – although, in all honesty, the only real difference is that we can watch that box-set on the telly….

However, Airbnb is not perfect – here’s what I’ve learnt from the stays I’ve organised through the site. 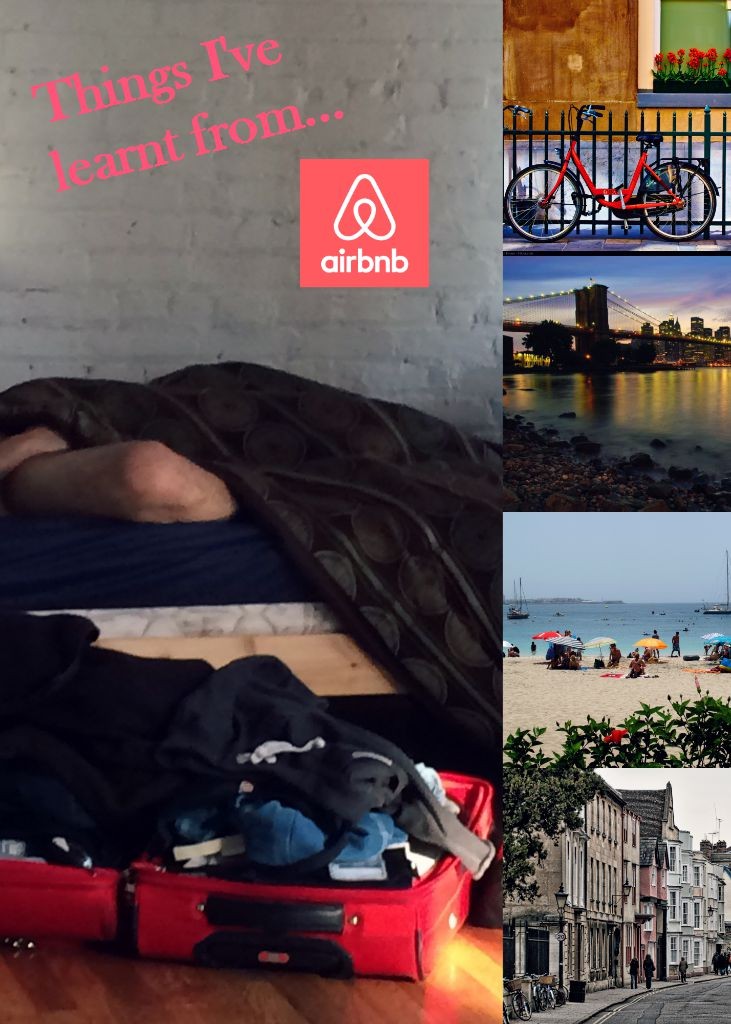 When I booked an apartment in Amsterdam through Airbnb, I didn’t realise the host had a cat – I’m allergic to them. As it was only for the weekend, and we would be out and about a lot, I shrugged and packed my anti-histamines. But not only did I find it uncomfortable wandering around someone else’s flat as the cat watched everything I did, I also did not appreciate being welcomed each evening by a large pool of cat pee just by the front door – just by the cat flap. The first time it happened, I assumed it was a one-off, but the next day I wondered whether it might be one of the cat’s more eccentric behaviour patterns that the hosts had chosen not to mention. If you don’t Instagram the bad stuff, it doesn’t exist – right?

When Juan took a trip to New York, Boston and Washington with his friends a few years ago, he spent a lot of time trying to find that elusive thing: a New York apartment that is close to something worth seeing but whose rate isn’t off-the-scale bananas. The apartment they found slept six, they were told. There were five of them, so it should have been positively roomy. They arrived in the middle of the night and were greeted by the host – nice of him to be there in person, they thought. What they hadn’t banked on was their host bedding down on the floor in the same room as them – and joining in their conversations… Awks.

Whether it’s shabby chic, creaky antiques, or Mad Men sleek, amateur decorators can go crazy for a certain theme. The hosts of one place we stayed in had painted most surfaces with black chalk paint, and covered that with self-conscious scribbles. Even the back of the loo door had been transformed into a blackboard, so that I could write ‘Nicky woz ere’ on it, graffiti-style, if I so chose. Except that when I saw the messages and notes people had written on it, presumably while on the loo, I didn’t much want to touch the chalk. Which brings me to my next point…

Filters and photo-fiddling can cover up dirt and dust

As Rachel pointed out in her PicMonkey tutorial, most photos look better when you ramp up the brightness – and that explains why almost all photos on Airbnb show light, spacious and impeccably clean homes. Although every place I’ve booked has closely resembled its pictures, any time I’ve stayed in somebody’s actual home (rather than a property that was bought to rent out), I’ve felt a bit icky living in their accumulated dirt. The kind of things that you put up with in your own home – the crusty oven, that grimy patch under the fridge, or the plughole that needs unblocking – are harder to stomach when they are languishing on someone else’s to-do list.

Sometimes it can be quite awkward…

As well as renting whole apartments, we’ve also stayed in hosts’ guest rooms – it’s always a cheaper option than a B&B in my experience. Because I’m quite chatty and outgoing, I don’t find this as awkward as other people might, but it all depends on your host’s personality. Some hosts literally pretend you’re not there – even when they’re in the same room as you. Once, Juan and I were trying to work out how to use our host’s oven while she watched TV a few feet away – the vibes she gave off were ‘Do Not Disturb’… At the other extreme, some hosts feel the need to entertain you, so you end up exchanging fantastically in-depth life stories – and then never seeing each other again. The awkwardness factor ramps up even further when there are teenage children skulking around the house and spending ages in the bathroom…

Some hosts appear to have been abducted by aliens

It’s always weird stepping into someone’s home and finding shoes in the hall, half-empty packets of food in the fridge, messages pinned to the noticeboard, and other evidence asserting their existence. On the one hand, I think part of the attraction of Airbnb is imagining yourself living the owner’s life – but only up to a point. There’s something much more thrilling about arriving at your destination and finding it so pristine that you feel like you might be the first people ever to have used it. My mother-in-law’s bungalow in Gran Canaria is that kind of place.

Other times, the experience is tailor-made for you

Yes, this point is just another excuse to bring up our recent trip to Turkey (sorry). But the house we chose, and the approach of our host, were definitely part of the reason why our holiday was so memorable. When we arrived, our host had lit candles in the courtyard and placed bowls of chocolates and fruit on the table; there was also a selection of homemade jams in the fridge, and plenty of water and Turkish beer. Because she ran a café in the village, she was always around to give us advice, help, or iced coffee, but if we didn’t need her, she left us alone. Plus, the house was just beautiful, and so much better than we could have imagined. In fact, we enjoyed being there so much that it made it difficult to leave the house and go sight-seeing.

What have been your best and worst experiences with Airbnb? I’d love to hear them…

P.S. How to survive flights with a toddler, camping the easy way, and another Airbnb success in Faversham.