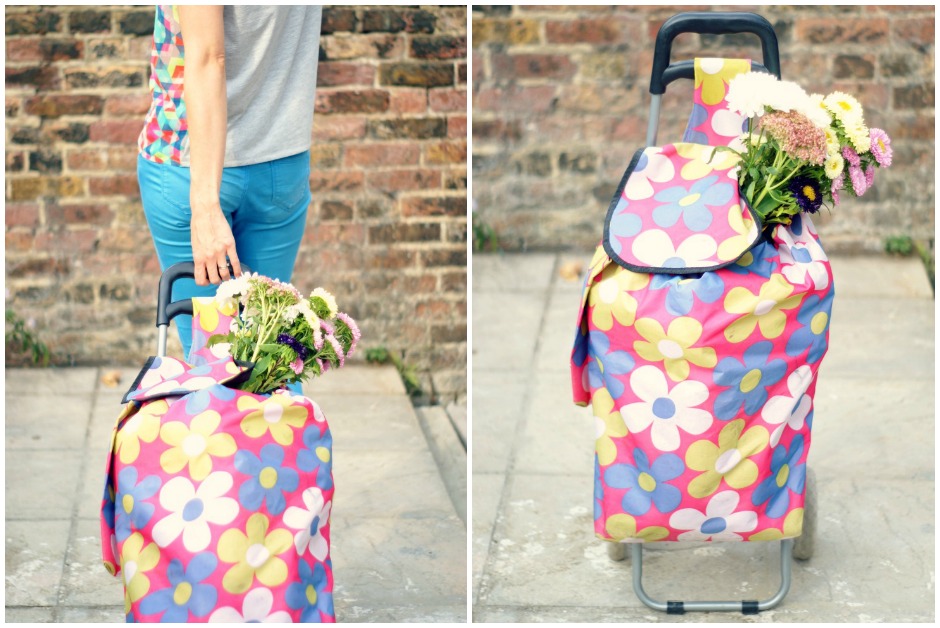 A few years ago, during a celebrity baby boom, magazines both glossy and trashy were packed with photos of A-listers pushing their offspring around in sleek, shiny Bugaboos. It’s the sort of marketing that gets normal people rushing to spend £1000 on the latest model.

There’s one thing that I would love to see boost both its image and its sales: the humble grocery trolley. That’s because I love mine with a passion, but I have to admit it’s not the prettiest thing I own. And it’s certainly not the coolest.

My trolley is a simple, foldable aluminium frame covered with a flowery fabric bag. I bought it for £10 from a Brixton market stall about 100 years ago – and I have to say it’s looking its age. That’s because I’ve used it for feats the manufacturers couldn’t possibly have imagined. Rachel and I once delivered two trolleyfuls of precariously iced cupcakes to a music gig on the Victoria line without a hitch. It’s been used to ferry industrial amounts of dead bamboo and dirt out of our back garden, through our house, and into the tip. Back in 2010, Juan and I even wheeled a bookcase from Streatham to Stockwell using just the trolley frame.

In general, however, my trolley is my supermarket saviour. Before I had Oscar, I filled it with my weekly food shop – not only because it removed the guilt of using scores of plastic bags, but also because my eyes were invariably bigger than my physical capacity, and my back couldn’t take the pain-laden trudge home. Post-baby, it has become invaluable for mini jaunts to the local shops – with Oscar in the sling, I can pull it behind us and stock up on anything from market grub to bags of firewood.

Let’s face it: although trolleys are toted by many people of all ages on a daily basis, no one who’s trundling one behind them turns heads for the right reasons. When I first bought mine, Juan refused to take it on solo shopping trips for fear of ridicule. Until recently, they were mainly associated with OAPs.

But other things that were once solely the preserve of pensioners have managed to find fashionable favour with the rest of society – think of the trends for grey hair, calf-length skirts and HRH-style shoes (not sported all at once, mind). It can be done. So what we need is someone to make and market a statement-making, aspirational trolley. A trolley that says all the right things about the person pulling it. And that trolley should be sent out to the cream of the celebrity crop, until your man and woman on the street starts to think that they need a trolley in their lives. In a few years, it will be unimaginable that anyone ever went to the shops without a trolley.

Then, my friends, I will be able to boast that I used a trolley before they became cool.

Are you a trolley dolly? Are grocery trolleys ever going to be ‘in’, or are you too cool to care?

Why dark polishes are my first choice for nails