George turned three recently and while he’s understood the concept of a birthday for a long time (and asked us several times a day for at least three months when his birthday is), he was much more interested in eating birthday cake than having an elaborate party. I figured I’d make the most of this and do something quiet at home before he starts demanding Laser Quest parties followed by Pizza Hut (did anyone else our age do that for their tenth birthday?). 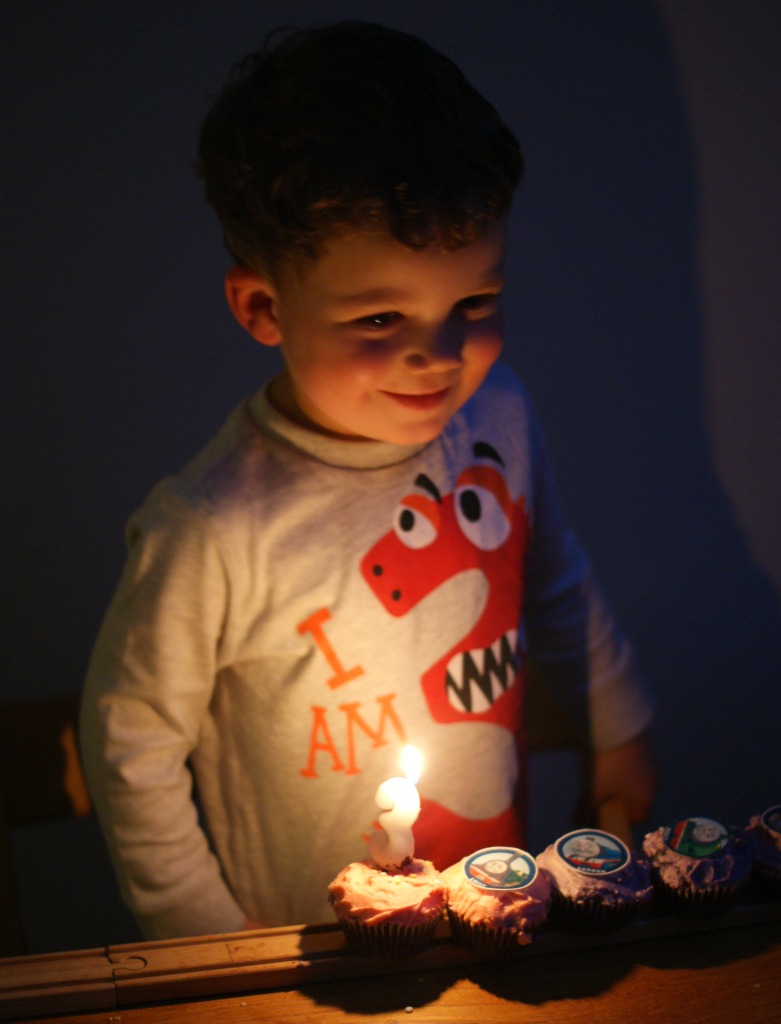 My main goal was to make it a fun day for George that required as little effort as possible from me. By and large, I think we achieved this happy medium, so I thought I’d share what we did in case you’re looking for ideas for your own party. Note: if you’re looking for a Pinterest-worthy party then you should probably head over to Pinterest…

Toddlers are generally quite easy to please as long as you stick to familiar favourites like sausages, sandwiches, juice and fruit. Obviously they like cake too, but I’m talking about acceptable lunch food here. If cooking is not your thing, I would buy everything (including the cake) ready made. Then all you have to do it unwrap, put it on paper plates and chuck it all in the bin afterwards. Why not? No one will notice.

While I like cooking, I didn’t want to spend hours preparing for toddler hordes, so I kept things really simple with sandwiches that I cut into cute shapes using some biscuit cutters (this generates loads of offcuts, though, so make there’s someone around to eat them!), homemade sausage rolls that I made in advance and froze, fruit kebabs which were just cut-up fruit that I threaded onto skewers, and some crudités with hummus. I felt a bit stupid cutting up the vegetables for a children’s party but they did actually get eaten. 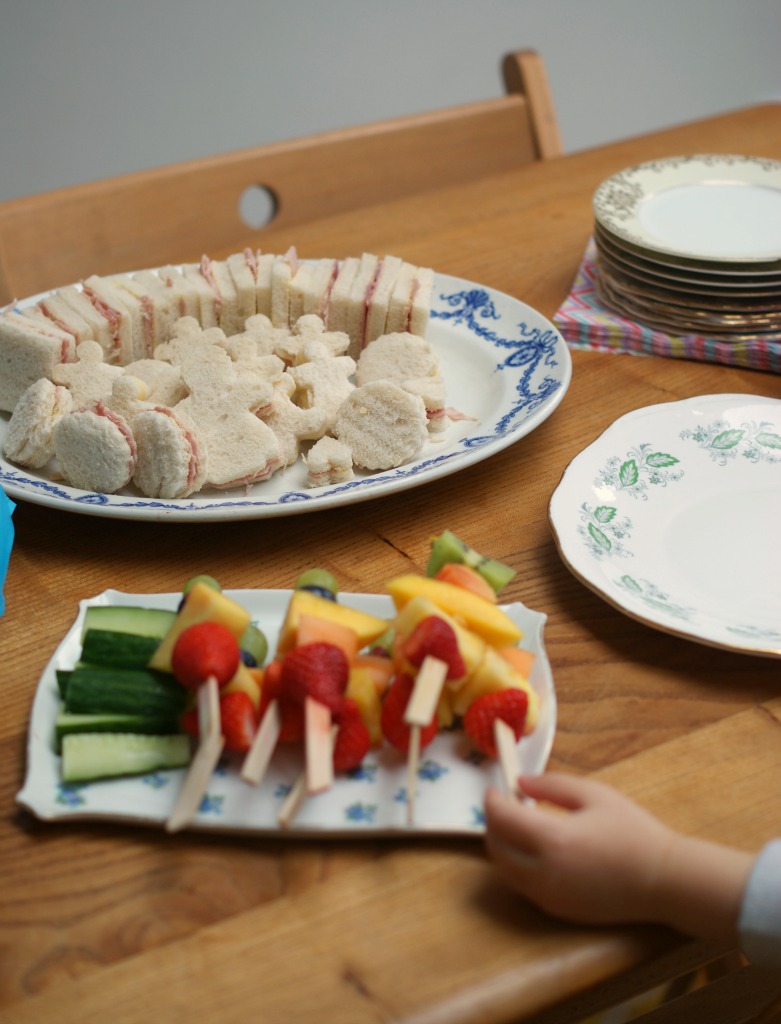 Make sure there’s food for the parents too. There’s nothing worse than going to a kids’ party and not getting fed. Not that I think parents need their own special food – just make sure there’s enough to go around and let them know they can dig in! Also, buy a couple of bottles of fizz.

If you’re into crafting, you could go all-out with decorations for a party – seriously, check out Pinterest if that’s your thing. We just hung up some happy birthday bunting that has been used for about five different birthday celebrations so far, and blew up some balloons we had lying around. Plus, the balloons double as entertainment. I saw some nice bunting from Waitrose with matching plates, cups, napkins, etc. but the pound shop is always good for these, too. 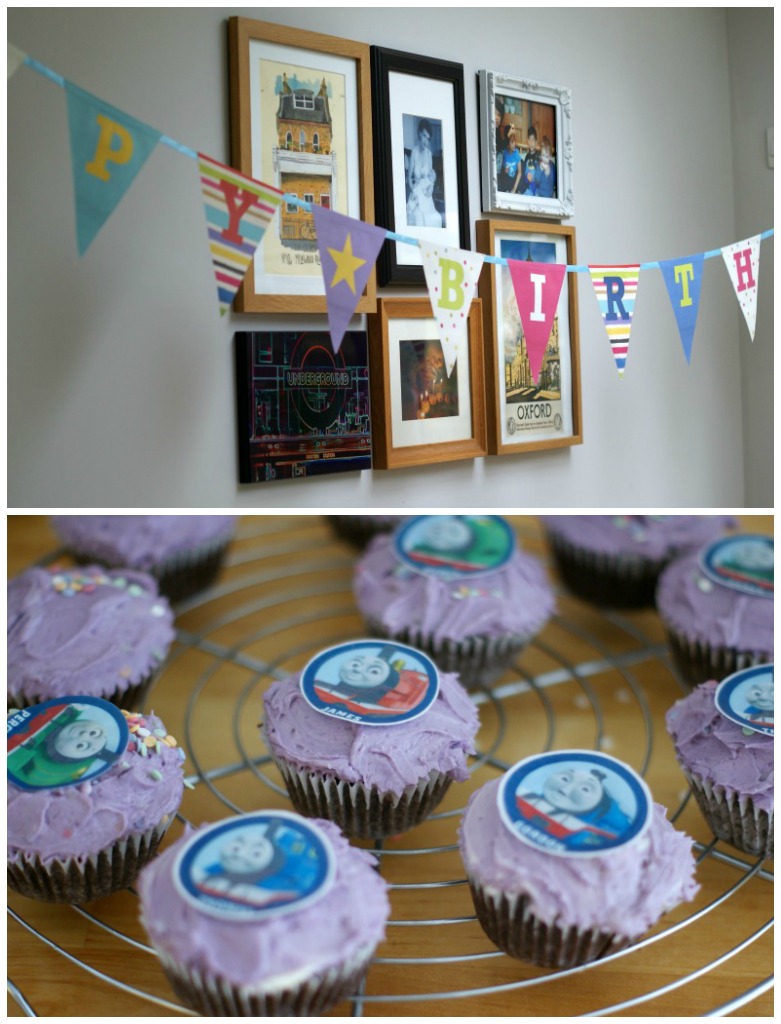 As I said above, if baking is not your thing, just buy a ready-made cake. Your kid will probably appreciate it a lot more anyway. I like baking (I actually made Nicky’s wedding cake) so I wanted to make George’s, but I didn’t want to try anything too elaborate as I knew (from experience) that it would probably end up with me totally stressed out and in tears. George requested the cupcake train that I made last year and it’s actually really easy – just cupcakes lined up on some train track. I used this chocolate cupcake recipe iced with buttercream and some Thomas the Tank Engine cupcake toppers. 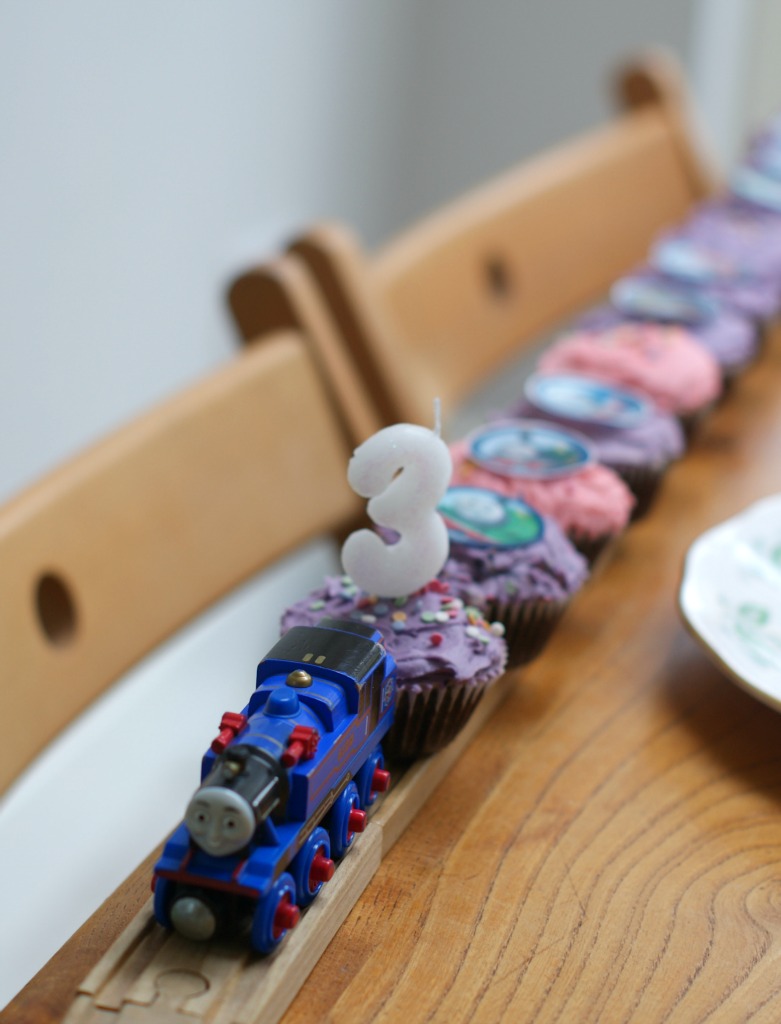 We did pass the parcel, which was fun but involved quite a lot of preparation for the entertainment it provided. The biggest hit was a treasure hunt. We hid Mega Bloks all over the house and each child had 30 seconds to find as many as possible, starting with the youngest. It felt like The Crystal Maze! Other than that, George has quite a big bedroom, so the kids were quite happy playing in there and generally charging around the house. In fact, they even instigated their own game of hide and seek! It’s worth saying that I invited people over at 12pm for lunch and most people had left at 4pm, which was probably a bit too long for the kiddos as they all looked absolutely shattered (read: on the verge of a breakdown) by the time they left.

We didn’t bother! Having been on the receiving end of a few of these, I know that the last thing I want is a bag of tat coming home with us – and for the host, it’s just another thing to organise.

That’s it! Once we’d run the dishwasher a few times, there actually wasn’t too much tidying up and when the boys were in bed, I got to spend the evening looking at baby pictures of George and trying not to cry.

Any other tips for a low-key kids’ birthday party?

P.S. How to buy a present for anyone.