Happy Valentine’s Day everyone! I have spent the last couple of weeks writing pieces about ‘the most romantic restaurants in London’, and ‘the best restaurants in which to propose’ for work when in fact, personally speaking, I would hate Juan to have proposed to me in such a public place. Come to think of it, I can’t think of any friends whose partners proposed in a restaurant, either.

I’ve actually only spent one Valentine’s evening in a restaurant – which perhaps says more about the state of my pre-Juan love life than it does about anything else, but hey. Back in the day, Juan and I used to religiously read Jay Rayner’s Observer restaurant column, and the way he described Corrigan’s, in Mayfair, got us very excited because, aside from sounding like an amazing experience, it also looked (on paper) like a one-off we could just about afford. However, because it was just that bit too expensive for a random Saturday, we decided to book for Valentine’s Day.

That was our first mistake: from then on, things just went downhill. The short version of this story (without having to go into the details of why I had to remove my bra on the Tube home…) is that as soon as we sat down, we were presented with a set menu that was £85 per head (without wine) and didn’t list any of the dishes that we’d read about. We conducted a hushed and panicked circular conversation – should we walk out right now or try to enjoy it despite the price? – and decided on the latter. Suffice to say, it was a tense, unromantic meal. Never again will I venture out on Valentine’s Day, I vowed. (I must point out here that on any other day, Corrigan’s is a wonderful restaurant.)

Anyway, thank God Juan didn’t propose in a restaurant. Despite the fact that I am no wallflower, I don’t enjoy being the centre of attention among strangers.

Juan proposed to me on Holkham beach, in Norfolk. We had decided to go to Norfolk for a weekend in late summer. Unbeknown to me, Juan had already chosen a ring with the help of my friend Becky, talked me out of camping in favour of a nice B&B, and told himself he would only propose if we were getting on well (ha! We had a screaming argument on the journey there!)

At that point, having spent five years living with Juan, I had assumed we would just be one of those couples who don’t get married, so I had no idea what was coming. I remember noticing that he was acting a little strangely on the way to the beach, but I couldn’t work out why. Then, when we arrived at Holkham, the beach just stunned me so much that I forgot all about his behaviour. We’ve been there many times since the proposal and, rain or shine, it is just the most breathtaking place. The scale of it is astonishing – if the tide is out when you arrive, you’ll easily walk a couple of miles before you reach the water’s edge. On the sea-facing side of the dunes, the sand is packed hard, so it’s perfect for proper walking. And the sheer space just swallows you, so you don’t bump into that many other people as you walk, despite it being a really popular destination.

Off we walked, occasionally passing other groups, couples or even people on horseback. Juan waited until there was nobody around – just us as far as we could see – and then came out with his rehearsed lines and got down on one knee. I remember suddenly feeling all shaky as I started to twig what was happening. Then, when Juan started clawing at his pocket trying to extract the ring and got down on one knee, I remember shrieking, ‘What are you doing?’ over and over again (not, I hasten to add, in a horrified way, just a bit hysterically). 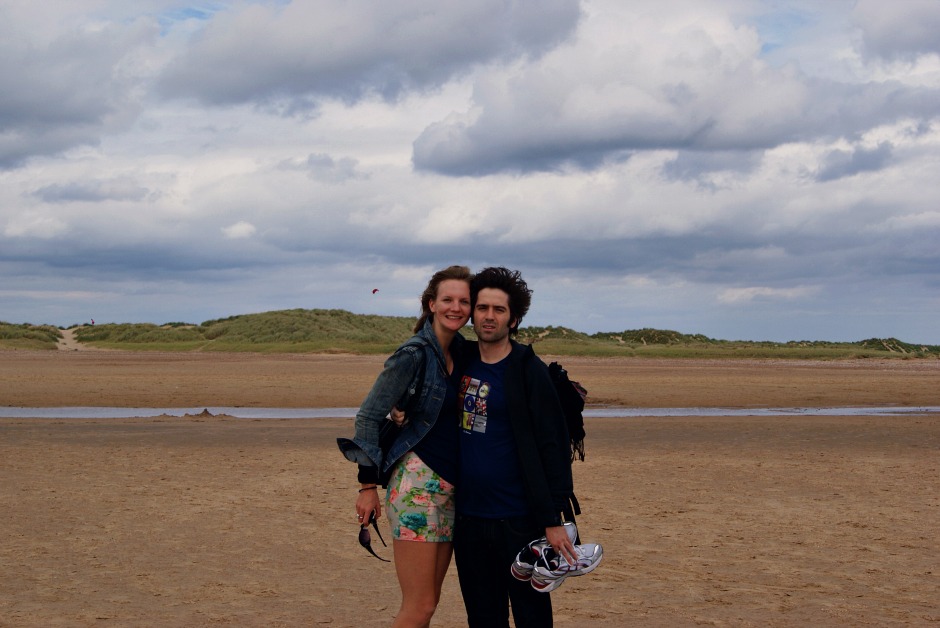 After I’d said yes, we retraced our steps while we talked about dates and locations. We decided to have lunch at the closest pub to the beach – which, as luck would have it, was selling barbecued lobsters in the garden. So we ended up celebrating our engagement with lobster, chips and a glass of Champagne in the sun. For me, it was perfect – and for that reason, Norfolk remains one of my favourite places.

There are, however, many inspired places and ways in which to propose. My absolute favourite proposal story is that of my friend Charlotte. She’s the kind of girl who’s so fun and bubbly and gorgeous that everyone wants to marry her – even her girl friends – so her then-boyfriend Matt must have known that he needed to pull something stupendous out of the bag to guarantee a ‘yes’ (even though he is – obviously – a catch too).

At the time, because they were saving up for their first flat, they had decided to celebrate Charlotte’s birthday in a low-key way, by going to Brixton’s Ritzy cinema. Matt was meeting her there straight after work, so he waited for her at her bus stop, then steered her towards the cinema, talking all the time and (she said) insisting on making eye contact with her the whole way there. When they got to the cinema, he asked her to sit down in Windrush Square (which is just outside the cinema), and then he waited for her to notice what the cinema billboard said. 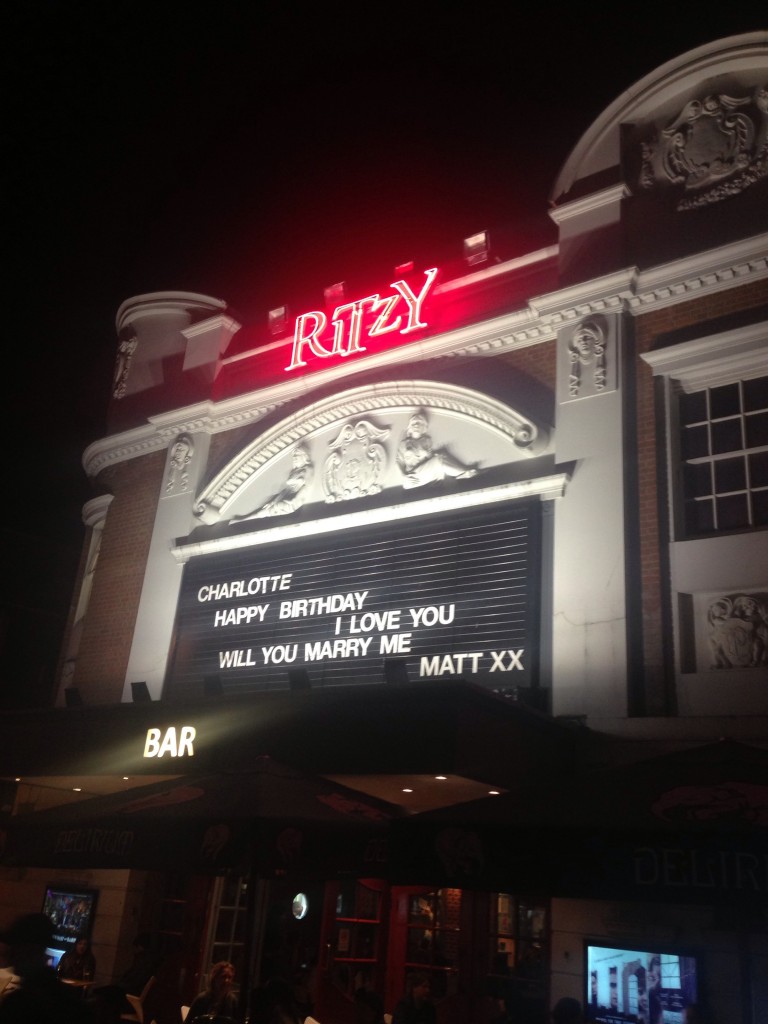 And then he got down on one knee.

I am welling up just recounting this story – and I think I burst into tears as soon as she texted me that picture. Apparently, because the message went up first thing that morning, random people had been noticing it all day and tweeting it, and Matt was completely paranoid that Charlotte might have already stumbled upon his proposal online. But all ended happily. The only thing with a proposal as inspired as this one, is that people have HUGE expectations for everything else connected with the wedding (let’s just say we weren’t disappointed).

What would be your perfect proposal? How did you other half propose? And what do you think of proposals in restaurants?

P.S. And then there was Oscar, trying to keep the romance alive with a baby, and London’s best-value dining options (if you must propose in a restaurant).