When Netflix first launched in the UK back in 2012, I was pretty excited. I had read pieces by writers from across the Atlantic about their marathons of favourites like Law & Order: Special Victims Unit and had felt pangs of envy. When it became available here, I signed up quickly and liked what I saw – the interface was user-friendly and the price was reasonable given the convenience of the service. However, the original line-up let it down – there just wasn’t the range and depth of content that any serious TV or film fan wants. Luckily, the offering on Netflix is continuously expanding and the range of TV shows (and films, though I watch way fewer of those) is so much better than it was at the start – and that’s without counting the high-quality Netflix Original Series that the company has added to its stable.

All told, watching large quantities of television has never been so easy – but where to start? For those of you who find themselves scrolling through page after page of titles, paralysed by choice and feeling pressured into watching House of Cards for fear of missing out, I’ve curated a list of Netflix options to suit every mood. 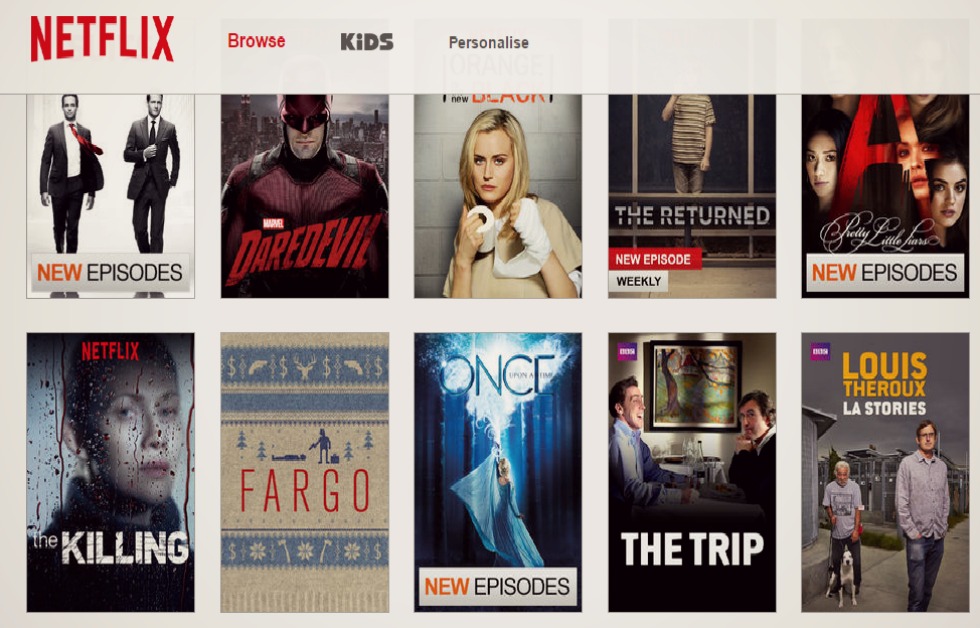 You’ve still got love for Angel and (even more for) Spike, and you flirted with the Cullens, but now it’s time for a new undead object of your affection. Now, I’m nowhere near up-to-date with this US series created by the guy who brought us Dawson’s Creek about a pair of vampire brothers, a teenage girl and the various other supernatural (and otherwise) residents of the fictional town they live in, Mystic Falls. As a show, it possesses many of the characteristics I hate about the small screen: plots that are either too fast or too slow; an annoying younger sibling you’re supposed to care about but never do; and a so-well-intentioned-it’s-irritating heroine. However, it also possesses Damon Salvatore (played by Ian Somerhalder) – a demented, amoral, blue-eyed vampire of your dreams who also gets all the best lines. Plus, not only is he not an actual teenager, he’s not playing one either.

…You want to laugh out loud, get a theme tune stuck in your head and remember that women are strong as hell

Confession: I ended up watching all thirteen episodes of this Netflix Original Series created by Tina Fey and starring Ellie Kemper in one long weekend. I’ve mentioned before how I don’t really watch much TV comedy, but once in a while a funny show just hooks me – and this was one of them. There is a strong feel-good element to this tale of a young woman who was imprisoned in a bunker by a cult leader and, having regained her freedom, has moved to New York to restart her life. I actually really like the positivity – and it’s well balanced by some sharp comedy; I found myself laughing out loud at points. I don’t know about you, but I hardly ever laugh out loud unless I am in company, but I sure LOLzed more than once while watching this. And did I mention that the theme tune is killer catchy?

…You have very strong feelings for Louis CK that you want to dwell on, but you can’t find a legal way to watch Louie in the UK

Can’t legally download Louie? Then make do with this recording of a live stand-up show by its creator instead. It’s not the same, but if, like me, this guy sends your feelings out of all control, then you’d probably watch him in anything – even Celebrity Masterchef.

…You’ve just watched an episode of Poldark and you need another story featuring a very cross, slightly misunderstood, handsome man to fill the gap until the next one

I’ve no idea how I missed this when it originally aired on the BBC, as its adaptations of the classics are always right up my street. You do have to suffer through quite a lot of bleakness as well as the presence of Daniela Denby-Ashe, but it’s still a thoroughly enjoyable ride with a sublime ending. I’m going to go out on a limb here and say it includes my favourite ever scene set on a train platform. Spoiler alert: Richard Armitage doesn’t gratuitously take his top off or anything – it’s not that kind of Poldark-replacement therapy.

Orange Is The New Black

Naturally, I’ve considered how I would fare if I were in prison after being wrongfully convicted of a crime I didn’t commit as a result of  a large-scale conspiracy with ramifications for the highest echelons of the legal and political establishment. Doubtless, the guards would be out to get me from day one and I’d annoy the hell out of all my fellow inmates, who would struggle to believe I could possibly be the subject of such an elaborate conspiracy. I’d give myself a couple of weeks.

…You want to watch some of my personal favourites

Head straight for The Good Wife, Friday Night Lights, House, Justified, Sherlock, Peep Show and Pride and Prejudice. Also, have you seen Stop at Nothing – The Lance Armstrong Story?! I’m not usually one for factual programming but it’s so fascinating I have watched it two and a half times. All that’s really missing at this point is all seven glorious seasons of the Gilmore Girls…

P.S. More of my favourite TV shows (not all of which are on Netflix), things that some of these fictional ladies taught me about female friendships, and five films that are going to make you cry.

The thorny issue of sharing money