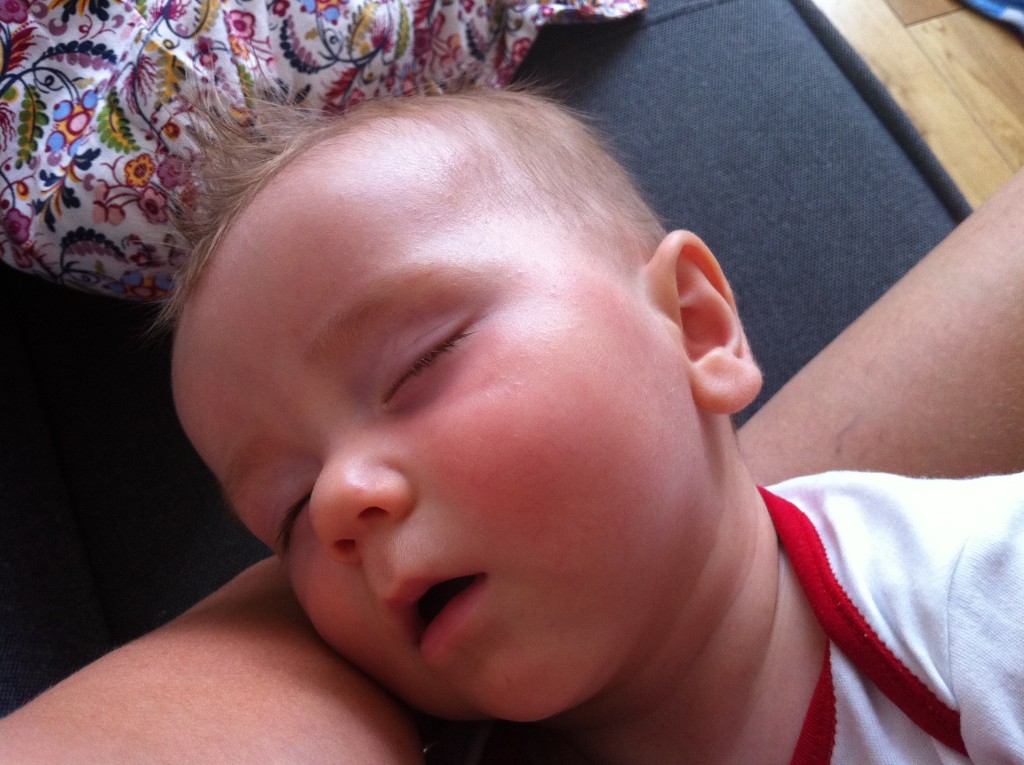 It has taken us almost 12 months to achieve, but Oscar (now 13 months old) can now recognise when he’s tired and will nap fairly reliably most days. This state of affairs might provoke a ‘meh’ response from non-mothers, or those whose babies slept brilliantly from day one, but for me it is a jump-up-and-down milestone. These days, when things are going well, I can put Oscar into his cot without a fuss and within 10 minutes he is fast asleep.

However, when Oscar was about four months old, and I read the sleep-training advice in Your Baby Week By Week

, the phrase, ‘You are aiming to be able to put your baby down in his cot, walk away, and for him to be asleep within 10 minutes’ absolutely horrified me, because at that point we were so far away from that goal – and already so, so tired – that it seemed almost cruel for such an impossible ask to be written there in black and white. It was obviously and quite simply never going to happen.

In the first few weeks of motherhood, I dreaded Juan leaving for work because it signalled up to an hour of me trying to calm a raging, writhing baby in a darkened room, often without success. There’s nothing more dispiriting than realising, 45 minutes into your struggle, that you are probably not going to win and you’ve not only wasted a lot of time and energy, you’ve also lost face to a two-month-old. (Except perhaps the knowledge that if you can’t even get the first nap – the easiest one! – under your belt, then it’s going to be a long, long day…)

So, how did I get from there to here?

I have to be honest: my memory is sketchy due to the blur that is the first year of parenthood, combined with lack of sleep – all I know is that the road to the Land of Nod has taken many twists and turns over the past year. Also, I must admit that my job was made easier by my husband Juan, who was instrumental in establishing good habits at bedtime proper – things that I could carry through to Oscar’s naps. But I also really believe that Oscar took the lead in large part – gradually, he seemed to become more and more comfortable with the idea of naps, and more receptive to the efforts I was making to get him to sleep.

At first, I just rocked him until he was out cold (all the while inwardly berating myself for breaking The Rules); I would then ever so slowly lower him into his Moses basket, hold my breath as I inched my hands from under him, cover him carefully with his blanket, and creep out. Luckily, Oscar started sucking his fingers at around 10 weeks, and that really helped him to fall asleep; I found singing to him on a loop kept him calm while he found those all-important fingers, and he soon associated the music and his surroundings with taking a nap. Recently, he started protesting loudly when I put him into his cot, but if I left him to it instead of rushing back in, he would almost immediately throw himself onto the mattress and sleep hard. And now, finally, he pushes me away when he realises it’s nap time because he wants to get on with it himself; all I normally have to do is put him down and walk out.

I assure you that this situation really was hard-won – I have been obsessed with Oscar’s sleep patterns since day one and have driven everyone bananas by stressing daily about his naps. In the interim, this is what I’ve learnt:

Firstly, it’s important to realise exactly how little newborns can stand to be awake – about 45 minutes to an hour. Since everything took me ages to achieve in the first few weeks, I ended up keeping Oscar awake for about double that, and by the time I took him to his room for a nap, he was beyond help.

I also think that rarely feeding Oscar to sleep was one of the few good decisions I made early on, and I would recommend following suit if you can (though it’s difficult, I know). For me, it meant that I could usually be pretty certain whether Oscar was hungry or tired, and he was rarely both at once – although of course there were those miserable days where he resisted sleep for so long that it was time to feed him again, and then he would crash halfway through his meal, still attached to my boob.

Thirdly – and very rich coming from me – it’s important to stay relaxed. It’s not easy, but it can be done; I would sometimes sing my frustrations to Oscar to calm us both down, or shush him using yoga-style breathing. The older Oscar got, the more relaxed I became – firstly because I finally accepted that sleep is not the be-all and end-all; and secondly because he needed fewer naps (yey).

Lastly, if you can stick with it until your baby starts nursery, you’ll find that it tires them out so much they almost welcome some down-time. An added plus for me is that the noise at nursery has also taught Oscar to sleep through unexpected bumps and bangs at home. Just for this, it is worth the small fortune I pay each month. 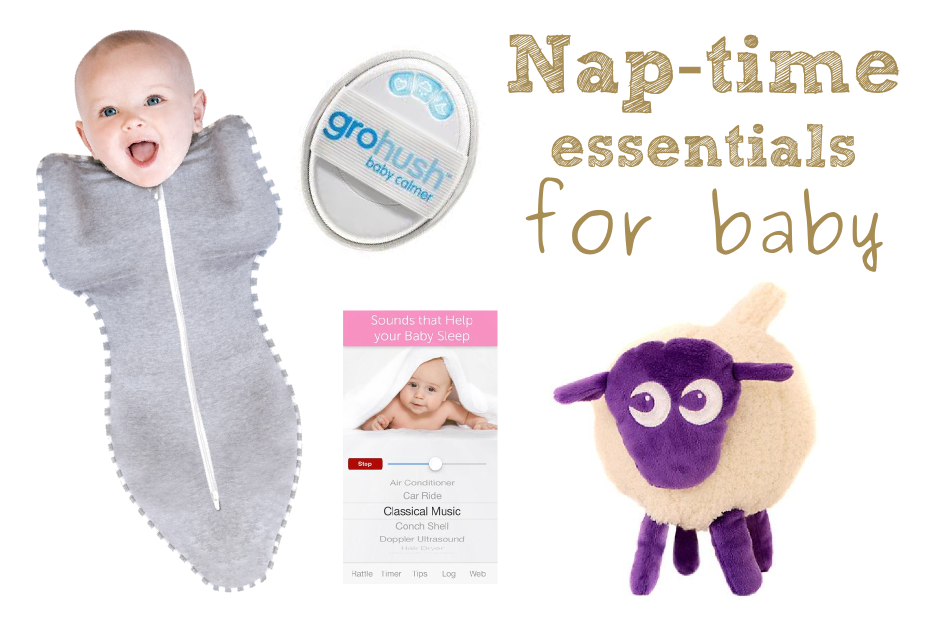 In terms of sleep aids, there are a few investments I would recommend. This swaddle blanket

was a godsend for me – when Oscar’s Moro reflex was still strong he would invariably hit himself in the face just as he had begun to drop off, instantly undoing all of my good work. Oscar didn’t take to traditional swaddling because he always wanted to have his arms up by his head and so would make like Houdini until he had freed himself; this modern version is much easier to put on (you just zip it up) and it kept his hands subdued but in an acceptable position.

We are also big fans of white noise – particularly because, in our flat, every tiny sound that we or the neighbours make can snap Oscar out of his reverie and ruin EVERYTHING. At first, we just used a mobile app – the conch shell loop on Baby White Noise was our free-of-charge favourite – but once I started obsessively Googling ‘sleeping through the night’ (as we all do in the end…), out came the credit card. My best purchase was Ewan the Sheep – the lovely bed-time music he emits saved both Oscar and me from all that singing and is the perfect Pavlovian prompt; we still use it. However, none of Euan’s soothing sounds lasts for more than 20 minutes; ideally, I would prefer to be able to set my own time limit.

On the subject of white noise, something new that I wish I could have used when Oscar was a newborn is the GroHush. It’s as portable as a mobile but much more discreet – the sounds it makes can only be heard by the baby, whereas I was regularly given strange looks by members of the public wanting to know the source of a whooshing noise that I’d completely tuned out. You can also put it into a cot or pram without worrying about exposing the baby to harm (something that always concerned me with mobile phones). Oscar is too old and set in his ways for the GroHush to be of much use now, but if I have another child I’m definitely going to use one. The only downside, again, is that it has an all-too-brief time limit of 10 minutes.

Despite the fact that the issue of sleep took over my life for nearly a year, having written down everything I’ve ‘learnt’, it doesn’t seem like much! And I haven’t even broached the topic of night-time sleeping – probably because, although we had Oscar’s bedtime routine down pat from the get-go, and for a glorious few weeks around the six-month mark he did sleep every night for 12 hours solid, at the moment he’s back to waking up at night (sigh). However, I’d sincerely love to hear your experiences of getting your baby to nap/sleep, and which techniques or gadgets worked for you.